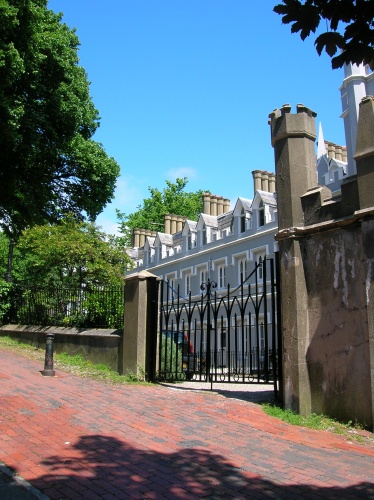 Houses on the western side of the terrace are numbered from 7-12, with a 7a next to no.7. It was considered unlucky to have a number 13 in the row!

Wykeham Terrace cannot escape attention, located as it is just down from St Nicholas’ Church and only seconds away from the city centre. Architecturally, it is one of the most striking terraces in the whole of Brighton, built in Regency Gothic style, possibly by A.H. Wilds or Henry Mew, between 1822 and 1830. Historically, it boasts a past that includes both squatters and a number of well-known residents; Dame Flora Robson and her two sisters lived at No 7 and, apparently, Leo Sayer and Adam Faith have occupied No 1 Wykeham Terrace at different times. Further back in time, the Terrace was simultaneously home to cavalry officers, an order of nuns and ex-prostitutes! This slightly odd arrangement coming about because the northern part of the Terrace served as the officer’s mess for cavalry based at Preston Park and St Mary’s Home for Female Penitents was located in the southern part.

St Mary’s was established in 1855 by Rev Arthur Wagner, in several small houses in Queen Square and numbers 1-5 and 8-11 Wykeham Terrace. Wagner, who ran St Paul’s Church in neighbouring West Street, was an extremely pious man and, in line with prevailing Victorian values, he wanted to clear the streets of prostitutes. Prostitution being seen as a bit of a problem in mid-nineteenth century Brighton; Judicial Statistics for 1859 recorded 97 brothels and 325 prostitutes - 25 under the age of 16.

Like many Victorians, Wagner was both fascinated by deviance and obsessed with its control and he set about building an institution to curb, contain and change what he saw as nonconformist and problematic behaviour in women. His Home was a charitable enterprise run by the nuns of the St Mary Order for morally outcast females; mainly prostitutes, but also female thieves, tramps, alcoholics and those described as “feeble-minded”. Once within the walls those popularly known as “fallen” women were changed into “honest” women, a conversion which incorporated both a spiritual change from sinner to penitent and an equally important social shift from dissolute and deviant female to respectable woman.

Despite its penal overtones and strict religious compliance, women did come and go voluntarily and among those to arrive at Wykeham Terrace in August 1863 was a young woman called Constance Kent. She came as a trainee nurse with particular responsibility for the care of babies born at the Home, but Constance was also a women with a past. In 1860, when she was just 16 years old, Constance had been suspected of murdering her three-year-old half-brother, Frederick; his body had been found in the privy (toilet) near the back door of their house. He had been stabbed in the chest and his throat cut. Medical evidence later suggested the cause of death was suffocation and the wounds inflicted afterwards. Constance and the boy’s nurse were arrested, but were later released due to lack of evidence.

When Constance entered St Mary’s she was, not surprisingly, emotionally damaged by this experience and wanted to immerse herself in work and religious practice. She applied to undergo Confirmation, but Wagner refused to accept her as a Confirmant because ...the stain of the suspicion of murder was still attached to her. In his righteous way, he set up a series of interviews with her to extract the truth and, after three days, Constance confessed to the brutal murder of her brother. Wagner took a written statement to the Home Secretary in London and insisted on a trial. This took place on 19th July 1865 and Constance pleaded guilty. The confession, although not written by her, was the only evidence and, because accused people were not permitted to speak in court, Constance was found guilty and sentenced to death unheard. When the sentence was made public, there was an outcry over what was seen as an unfair trial. Wagner and Catherine Ann Gream, the Lady Superior of the Home, were reviled for allegedly having pressurised the girl into surrendering to the law. In Brighton the nuns of St Mary’s were abused in the street, Wagner was attacked in North Street by two drunken sweeps and on another occasion he was shot at. This show of public opinion and, I suspect, fears over an “unsafe” confession were such and that the death sentence was commuted to imprisonment. After twenty years, Constance Kent was released into the custody of Rev Arthur Wagner. The following year she left England to live in Australia.

St Mary’s Home for Female Penitents, founded for the reformation of prostitutes, remained in Queen Square and Wykeham Terrace until a new building was erected by F.T.Cawthorn in Falmer Road, Ovingdean in 1912. 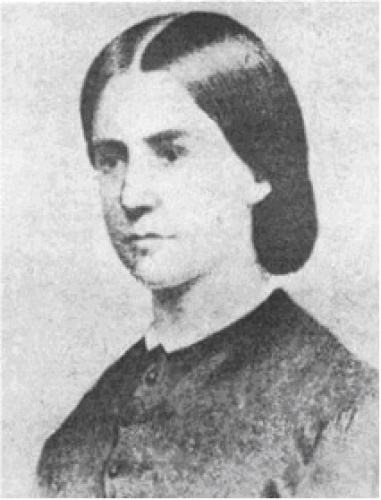 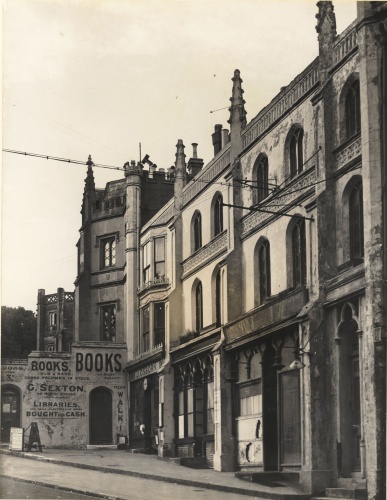