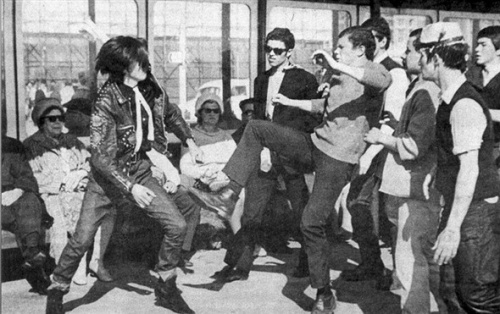 Whitsun has the feel of one of those long forgotten events, like Lady Day or Michaelmas. As a child growing up in a seaside town, Whitsun was the time when the B&B sign went up in the front window and my sister and I vacated our bedrooms for ‘the visitors’. Later I realised that Whitsun could be a far more exciting time. Being too young to remember newspaper headlines like the Evening Argus’s ‘Battle of Brighton’, this revelation came to me via The Who and Quadrophenia; first the 1973 album and then in 1979 the film which immortalised the clashes between Mods and Rockers on Brighton seafront over the Whitsun Bank Holiday of May 1964.

As a cult classic, Quadrophenia is still shown every May at the Duke of York's cinema and thirty years after it was filmed it continues to draw visitors to the town. Until recently, BrightonWalks conducted tours of all the film locations (alleyways included). Being a paid up member of The Who fan club, I do not want to query Pete Townsend’s vision or the realism of Jimmy’s riotous exploits, but I am slightly curious about the actual events of Whitsun 1964.

On Tuesday 19 May, The Guardian reported on the weekend’s battles. The reporter claimed that the only difference between the two groups appeared to be their dress, with rowdy behaviour by both Mods and Rockers succeeding in scaring hundreds of holidaymakers. He went on to list the offences committed by the fifty-nine ‘unruly adolescents’ arrested, including throwing stones, carrying offensive weapons (including a starting pistol, a leather belt with brass buckle, a cricket bat, a golf club, chains and stones), obstructing the police, damaging deckchairs, using threatening behaviour and using obscene language.

This now familiar hint of moral panic over Britain’s youth is also evident in the way the police responded to the 2,000 plus ‘invading’ teenagers. The first-hand account of police officer David Rowland leaves no doubt that they planned, from the outset, to deal very harshly with the Mods and Rockers and to demonstrate just who was in charge. On Friday 15 May, the start of the Bank Holiday weekend, roadblocks were set up on the main routes into town, stopping the scooters and motorcycle riders. The idea was to harass them as much as possible in the hope that some might turn back. At 1 a.m., when most of the Mods had settled at the eastern end of Madeira Drive, they were awoken by three vanloads of police who moved in questioning and checking their details. This operation was repeated a few hours later, the idea being to deny the Mods sleep so that they might want to lie-in and not cause too much trouble the next day. Mods and Rockers arriving down Queens Road on Saturday morning were stopped and their bikes examined for traffic violations. The Mods were then herded onto the beach so that they could not run amok through the town. The police had ‘snatch-squads’ who went onto the beach and arrested suspected ringleaders. They were put into vans, forced to remove their shoelaces and trouser belts, then they were driven to the Devils Dyke, deposited at the junction with Saddlescombe Road and left to make their own way home. Mods and Rockers who appeared before the magistrates and pleaded ‘not guilty’ were remanded in custody and taken to Lewes Prison. One week later when they returned to the dock they were all virtually bald, prison authorities having deemed it advisable, for health reasons, to shave their hair off. For those convicted of breach of the peace or any type of damage heavy fines were imposed. Anyone convicted of assault was spared the cat-o-nine tails, but did receive a three-month prison sentence.

To people raised on war, discipline and National Service the clashes between the rival youth cultures might have looked like the breakdown of society, but I suspect Marjorie Proops, writing for the Daily Mirror, may have been right in thinking that too much was being made of it. ‘It is a pity…we can’t just hand over a few old deckchairs and a deserted chunk of Brighton Beach…and let them play their ridiculous kids’ games so we can snooze in the sun in peace’. Certainly, one of the most compelling images used by newspapers at the time is now recognised as being staged, with anecdotal evidence suggesting a ten-shilling note was paid by a member of the press. The picture shows Mods trying to drive Rockers from the Aquarium terrace under a salvo of deckchairs, but if you look carefully those seemingly being attacked by the Mods look just like more Mods.

However, there was one event during the course of that Whitsun that no one can dispute. A small group had camped out on the cliff top at Saltdean. When they woke the next morning one of them was missing. His body was later found at the foot of the cliffs.
This sad ending brings me back to Quadrophenia and Jimmy’s scooter flying off the cliff at Beachy Head and my incorrect, but instinctive feeling that he went with it!

The Mod, or modernists, movement were a mainly urban, southern phenomenon. They embraced the coolest blues, jazz and ska dressed sharply in Mohair suits, smart shoes, and pressed shirts along with U.S. Army surplus fishtail parkas to protect their outfits from the elements. The best-dressed, coolest Mods were known as 'faces'. Lesser individuals were 'numbers' or 'tickets'. With most of their money spent on clothes, there was not much left for transport, so Mods adopted relatively cheap Italian Lambretta or Vespa scooters, often customising them with white-wall tyres and extra mirrors.

Rockers clung to the 1950s rock and roll style. They had their own uniform, which consisted of a black leather jacket, Denim jeans and black leather boots with white socks, which were rolled over the tops of the boots. An essential element of this macho culture was a powerful, stripped-down, British-made motorcycle known as a 'cafe racer'. These machines were capable of 100mph, or a 'ton': the Rockers who rode them were also known as 'ton-up boys'.

The number of teenagers in Brighton over the Bank Holiday weekend was variously estimated at between 2,000 and 3,000. Most were between the ages of 16 and 18 years very few were over the age of 20. Which means that they are now in their 60s and may even be contemplating retiring to a nice seaside town - Margate, Bournemouth or Brighton perhaps!

After the 1964 disturbances in Bournemouth, Margate and Brighton questions about teenage violence were raised in Parliament. There was talk of vigilante groups being formed to deal with any further trouble and calls for the cat-o-nine tails to be used on convicted offenders.

The Water Board gave up their vehicles for police use over the Bank Holiday Weekend. This greatly increased the number of vehicles available to ferry police to trouble spots and completely fooled Mods and Rockers who never expected a dozen police officers to jump out of the back of a blue corporation waterworks lorry. 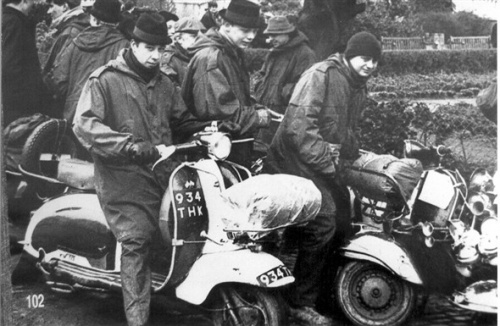