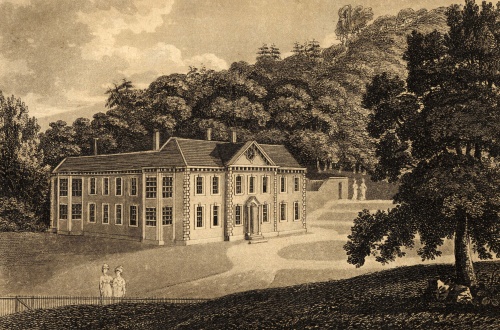 We all know about Brighton’s restless dead; the woman in white at Preston Manor, the haunted house in Prestonville Road, the famous grey nun in The Lanes, ghoulish monks, martyrs and drowned sailors. The World Horror Convention went so far as to declare Brighton the UK’s ghost capital. There is, however, one haunting, said to have occurred at Patcham Place, that seems to attract less attention.

Patcham Place is a Grade II listed mansion that stands on its own on the west side of London Road opposite the village of Patcham. It was originally built in 1558 for Sir William West, 1st Baron De La Warr; but the estate soon passed to Richard Shelley, (ancestor of the poet, Percy Bysshe Shelly). Richard Shelley was an important figure in Brighton’s early history, as one of three commissioners to record and regulate the “ancient customs” of Brighthelmston’s villagers and to mediate between the often conflicting needs of the fishermen and farmers.

Around 1620, the Shelleys sold the estate to Anthony Stapley who made it his home for the next 35 years. During this time, Stapley was MP for New Shoreham and Lewes and also the Governor of Chichester. More radically, he emerged as one of the leading Puritans in Sussex and, at the outbreak of the First Civil War, was commissioned colonel in the Parliamentarian Army. In 1649 Stapley was one of the 59 commissioners who sat in judgement on Charles I during his trial for high treason. Stapley was present at Westminster Hall on 27 January when sentence was pronounced, and on 29 January, sitting in the great hall at Patcham Place, he signed the death warrant of Charles I.

Stapley went on to have a full and distinguished career in Cromwell’s Commonwealth. He died in January 1655, and was buried in Patcham and it is his ghost that John Rackham, in Brighton Ghosts, Hove Hauntings (2001), claims once wandered Patcham Place, creating “a feeling of malevolence”, especially after dark.

Perhaps Stapley could not rest because of his part in Charles I’s death - regicide is no small matter and it turned out to have fatal consequences for many of the 59 signatories at the Restoration in 1660. In some cases those found guilty of regicide had their estates confiscated, but others faced exile, life imprisonment or execution by being, hanged, drawn and quartered! Or perhaps Stapley could not rest because his son, John, joined the Royalists against Cromwell’s Protectorate and, in trying to expiate his father’s crime, plotted for the return of Charles II. Stapley’s ghost must surely have groaned and rattled his chains around Patcham Place on the day John Stapley was knighted by Charles II and created Baronet Stapley of Patcham

Patcham Place stayed in the Stapley family until 1700, when debt forced them to sell. From then on it passed through several owners and was used amongst other things as the venue for local law enforcement; the place where the parish constable could take people suspected of crimes to be charged in the presence of a Justice of the Peace.

In 1764, Major John Paine bought the house, and set about extending and rebuilding it. He eliminated all traces of the 16th century Elizabethan structure behind a new façade hung with black glazed mathematical tiles- a feature of many residential buildings in Brighton at that time – and Tuscan columned entrance porch.

Some time after all this work took place, local gossip would have us believe a subterranean passage was in use from the Black Lion Inn, Patcham under the London Road, to the grounds of Patcham Place. It is claimed that smugglers used this to evade the law and that several battles took place between smugglers and customs men in the copses around the mansion. Slightly easier to substantiate is the proposition put forward by John Bishop in A Peep into the Past, 1892 (taken from Robert Huish, Memoirs of George IV Vol 1) that Miss Lucy Howard lived at Patcham Place and was visited there by the Prince Regent. It being the Prince’s custom to leave Brighton at twilight ride along the Lewes Road and then strike back over the Downs to visit this young lady, much to the annoyance of Lady Jersey, supposedly the favourite of the fickle prince at that time.

In 1926 Brighton Corporation bought the house and its grounds for £6,000 and in 1939 leased it to the Youth Hostels Association. Patcham Place was, according to the Association, its finest house. It remained a hostel until 2007, when the lease expired, and is now back under the guardianship of Brighton City Council who plan to undertake another round of restoration work.

Patcham Place has such an interesting history. It has been a place of great excitement, but it has also suffered serious dilapidation, Canadian troops during WWII, the floods of 1960 and the storm of October 1987, but it remains standing to this day. I just hope the ghost of Anthony Stapley appreciates it all.