This August Bank Holiday weekend, like very many before it, the circus will be in town. Zippos Circus will be on Hove Lawns from the 21st August to 3rd September carrying on Brighton and Hove’s long tradition of hosting circuses and fairs.

Circuses have been touring, to even the smallest towns, since the late 18th century and by the 19th century, with the development of the railway enabling them to travel faster and further, hundreds of circuses operated around England. At the same time and visiting the same fairgrounds, were large menageries. These were very popular with the Victorian public, who had a real interest in seeing wild animals in the flesh.

The first combination of circus and menagerie was at Astley’s in 1838 and it was here that the lion tamer, Isaac Van Amburgh, declared himself the first man to put his head inside a lion’s mouth (for entertainment purposes!). Queen Victoria watched this bold feat and was, allegedly, quite amused.

Brightonians at this time would have been entertained by an equally famous circus run by the Ginnett family. Their founder was Frenchman, Jean Pierre Ginnett, who first performed in Ludgate Circus, London with his pony and a budgerigar. His son, John, first appeared in Brighton in 1832, billed as the ‘Infant Ginnett’. He rode a ‘speeding horse’ in front of King William IV and Queen Charlotte and was described by the Brighton Herald as, ‘the finest tight-rope dancer, ceiling walker and rider of his day’. John went on to build a permanent circus at Park Crescent Place, which became the Gaiety Theatre in 1890, and the Hippodrome (later the Grand Theatre) at the top of North Road. Here audiences were entertained by a ‘boneless wonder, a troupe of lady acrobats, some remarkable somersault turning, living pyramids by the Bashi-Bazouk Arabs, and balancing on the high trapeze by Mademoiselle. Emmeline.’(Brighton Herald). Possibly even more impressive were the aquatic circus acts, performed in the Hippodrome’s 60 foot outer circus ring, which could be submerged, in just fifty seconds, to form a lake leaving the central ring as an island.

The magnificent Ginnett family mausoleum in Woodvale Cemetery, Lewes Road is testament to their success as circus proprietors and their popularity with the general public. From 1890 until the 1930s, Ginnetts were one of the UK’s largest circuses, only closing down for a period during the First World War, owing to (and this is according to their official website) the War Office requisitioning over 200 of their horses.

Bertram Mills’ Circus also featured horses and ponies. In fact, in the summer of 1948 they toured with a menagerie of 137 animals, including a crocodile whose trainer, ‘the only female fakir’, placed her head inside his mouth – is this more impressive than a lion’s mouth? I’m not sure. Anyway, a Brighton Herald reporter knew what impressed him most and it was the circus’s ‘uncannily intelligent’ footballing elephants.

Based in Olympia, London, Bertram Mills’ Circus toured, dividing the country into a three-year cycle, and in August 1939 they set up on The Level in Brighton. The Level has historically been a regular venue for circuses, but on the eve of World War II it must have been an especially welcome distraction. This circus, however, did much more than keep up morale on the Home Front, as Kevin Bacon (Digital Development Officer, Royal Pavilion and Museums), demonstrated in his 2009 War Stories Exhibition.

Bertram Mills had died in 1938, leaving the circus to be managed by his sons. One son, Bernard, served with the Royal Air Force and another, Cyril, became heavily embroiled in the world of espionage. From 1936, using his pilot’s licence and in the guise of a circus proprietor, Cyril took many flights over Germany on the lookout for anything suspicious that might indicate to the British Security Services covert German military action. When war broke out he continued gathering intelligence, ‘guiding work for the celebrated double agent Garbo (Joan Pujol Garcia), forging links with United States security agencies, and moving to Canada to become MI5’s representative there’.

In the 1950s Billy Smart’s circus came to The Level with a herd of 15 elephants and a big top that seated 4,000. They came by train to Brighton Station and paraded from there down Queen’s Road to the Old Steine and back along to St Peter’s Church. But by the time they return in the mid-1960s, circuses were beginning to facing a bit of a dilemma. Cyril Bertram Mills came out of retirement in 1978 to organise his final circus at the newly opened Brighton Centre, but this was not a great success. A major stumbling block was the change in people’s attitude to touring wild animals in cages and fears about endangered species. Tony Hopkins, who runs Billy Smart’s circus today, believes that the actions of a woman from Hove, who formed a protest group, were responsible for Brighton and Hove being one of the first local authorities to ban circuses from performing in their area.

At the time, a circus without animals did not appeal to traditional circus fans, but I wonder if the 19th century stars had still be around things might have been different. Who would not want to see the aerial transvestite Barbette; ‘Schaeffer’s thirty Midgets’; Pimpo, Doodles and Coco the Clown; or Whimsical Walker with his donkey called Tom who sang to the accompaniment of toy bagpipes, a trombone and a violin? 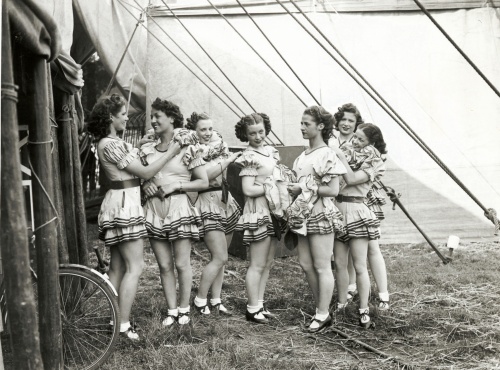