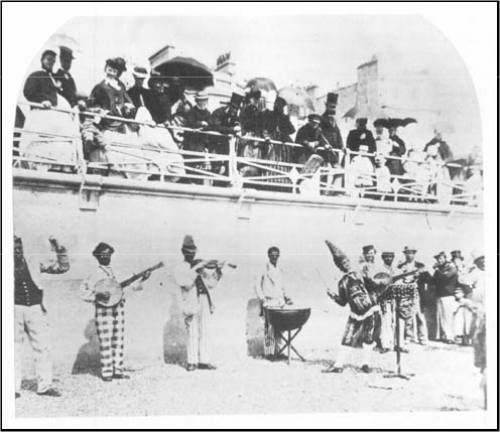 Beach entertainers, including a black minstrel band, on Brighton Beach in the mid 1860s. Taken from The History of Photography in Brighton

On 25 March 1807, the Abolition of the Slave Trade Act was passed. Two hundred years on this event was marked by a range of different celebrations, which tried to address what, for many, is almost impossible to take in - the sheer scale of the transactions of slavery, men, women and children as cargo, people whose names, heritage and culture were stripped from them.

Newspapers, television and radio programmes opened up the debate by discussing in-depth the basics of what the slave trade did to the world.

The legacy of slavery is not something that is measurable, but a way to test our understanding of it is to look for physical reminders of slavery within our own community. Bert Williams, from Brighton Black History, has done just that, he has studied Brighton’s connections to slavery and demonstrated that the history of the slave trade can be found throughout our city.

The continuous history of Black people in the town dates from the mid 16th century and the beginning of the slave trade. One of the earliest illustrations of the presence of Black people is on the Arms of the Blakers of Portslade, granted in 1616, this depicts the heads of three Blackamoors - Negroes with African hair (source Arms of the Sussex Families). In the 18th century there was an influx of Black people into Brighton and Hove as officers from the slave ships, plantation-owners and merchants came back here to live and brought with them their house-slaves and servants. Young slaves were a fashionable status symbol and enabled many families to continue the privileged way of life that they had enjoyed in the colonies.

It was not just Black pageboys in fancy uniforms; a print in the Brighton Museum shows an exotically dressed Black drummer with his band outside the Royal Pavilion. There were, in fact, a number of Black soldiers with the Prince Regent’s favourite regiment, the 10th Hussars, who were stationed in Lewes Road, Brighton. One of these soldiers, William Afflick from the Caribbean Island of St. Kitts, baptised his son in St. Nicholas Church.

In 1789, the land on which the houses of the Royal Crescent now stand was sold to a speculator called J. B. Otto. Otto, who had made his money out of a plantation in the West Indies, began by erecting three houses at each end of the Crescent. When he had completed the six black-tiled houses, he returned home to Barbados. In January 1807, the Brighton Herald recorded that Otto had come back to Brighton and completed the construction of the remaining houses in the Crescent.

Black History tells us of a Brighton Herald report in May 1826 that a man sold his wife at a public auction in Brighton market. Of key note to us is that the woman was sold wearing a halter around her neck. Details of the sale were entered in the Brighton market register and show that the purchaser paid a sovereign and four half crowns for the woman, a shilling to the auctioneer for his services and another shilling for the halter.

St Nicholas Church appears again on our trail of the history of slavery within Brighton’s built environment, this time as the place where an African Princess got married. Sarah Bonetta Forbes, a West African princess, had been orphaned in her home country at the age of eight and taken into slavery by the King of Dahomey. In June 1850, she was rescued by Captain Forbes of the English ship Sally Bonetta and brought to England. She was named Sally Bonetta after the ship and took the surname of Forbes from the ship’s captain. Later she was given to Queen Victoria who was so impressed by the girl's regal manner and intelligence that she gave her permission for Sarah to be married. On the 14th August 1862, in St. Nicholas Church, Sarah married James Labulo Davies, an African merchant who lived in Victoria Road, Brighton. The Brighton Gazette reported that the wedding guests included ‘white ladies with African gentlemen, and African ladies with white gentlemen until all the space was filled. The bridesmaids were 16 in number.’ After her marriage, Mrs Davies returned to Africa with her husband.

Victoria Road, where Sarah’s husband lived, was also where Bert Williams found four sisters whose grandfather had been a slave. Tracing back their family history, he confirms that the slave’s son was freed and made his fortune in London. He married an English white woman and their four daughters enjoyed a pleasantly affluent existence in Brighton enjoying their affluence until their deaths.

If you are interested in continuing this exploration of Brighton’s connections with the slave trade, I recommend that you visit the Black History website where you will find further material and pictures www.black-history.org.uk 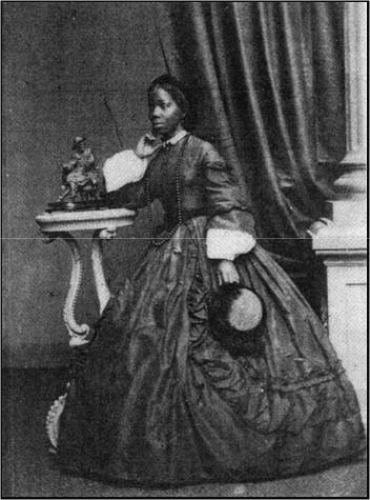 Sally Bonetta Forbes, who became Mrs Sarah Davies on 14 August 1862. A portrait by Merrick & Co. Taken from The History of Photography in Brighton 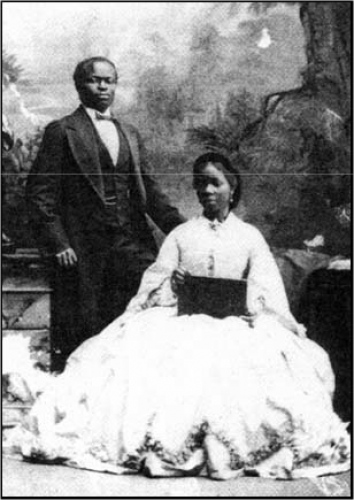