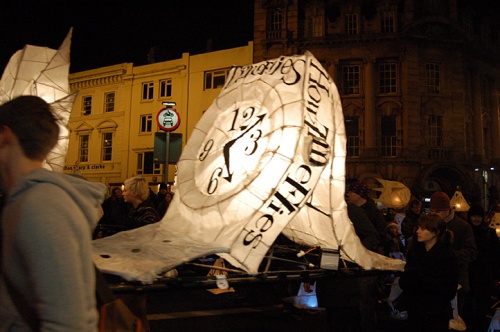 At this time our attention is once again taken up with Christmas preparations; what shall we eat, what to buy that ‘difficult’ man, will the wrapping paper co-ordinate with the chosen colour scheme and, perhaps this year more than ever, will the funds stretch?

The Winter Solstice is in the main forgotten, even though this Pagan celebration (also known as Yule) is one of the oldest winter celebrations in the world. It falls on the shortest day of the year (21st December) and was celebrated in Britain long before the arrival of Christianity. The Druids cut the mistletoe that grew on the oak tree and gave it as a blessing. Oaks were seen as sacred and the winter fruit of the mistletoe was a symbol of life in the dark winter months. It was also the Druids who began the tradition of the Yule log. The Celts thought that the sun stood still for twelve days in the middle of winter and during this time a log was lit to conquer the darkness, banish evil spirits and bring luck for the coming year.

Ancient people were hunters and the seasons and weather played a very important part in their lives, with many people worshipping the sun. The Norsemen of Northern Europe saw the sun as a wheel that changed the seasons. It was from their word for this wheel “houl” that the word Yule is thought to have come. At mid-winter the Norsemen lit bonfires, told stories and drank sweet ale.

The ancient Romans also held a festival to celebrate the rebirth of the year. Saturnalia ran for seven days from the 17th of December. It was a time when the ordinary rules were turned upside down. Men dressed as women and masters dressed as servants. The festival also involved decorating houses with greenery, lighting candles, holding processions and giving presents.

Many of these customs sound and feel very familiar and are still followed today in both Christian and secular celebrations of Christmas. However, there is a fundamental difference between what has become Christmas in our contemporary society and the Pagan belief system. Pagans see the Winter Solstice as the turning point of the year. Even though it is the longest night, with more than 12 hours of darkness, it is most importantly followed by days that gradually grow longer and the sun stronger. The Winter Solstice is primarily a celebration of rebirth.

There are many traditions that stem from this perspective. One celebration that has become a bit of a tradition in Brighton is the annual Burning of the Clocks, a Yuletide ceremony drawing on ancient magical folklore. Founded in 1993 by Same Sky, the celebration centres round a carnival type procession of lanterns and costumes led by local bands. The costumes all include a clock face to represent the passing of time, although each year has a slight change of theme. The procession makes its way through Brighton city centre to the seafront where the festivities end with a lantern bonfire and fireworks. The parade regularly consists of around 1,000 participants and attracts audiences of 20,000 people.

Same Sky, an arts initiative, first organised the event to commemorate the Co-Op’s 150th Birthday. They explain: “Burning the Clocks is an antidote to the excesses of the commercial Christmas. People gather together to make paper and willow lanterns to carry through their city and burn on the beach as a token for the end of the year ... The lantern makers become part of the show as they invest the lanterns with their wishes, hopes, and fears and then pass them into the fire”. “No lantern is better for its purpose than any other, all are unique to the maker and precious but all are given up to be burnt to greet the lengthening days”.

Burning the Clocks is produced with a small grant from Brighton and Hove City Council and the goodwill of local companies and individuals. This year the event will be the culmination of Same Sky’s 21st birthday year, and they will be returning to the original clocks theme to celebrate their time in the city. The parade will leave at 6.30p.m.taking a route long North Street, Ship Street, Bartholomews, East Street and arriving at Madeira Drive at approximately 7.15p.m.

Over the last 15 years Burning of the Clocks has become a new urban ritual for us in Brighton. It is certainly a high profile community event that can be enjoyed by all – Pagan and non-Pagan, those with co-ordinated wrapping paper and those without!