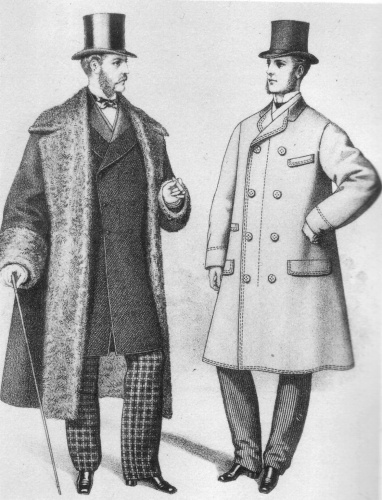 Today our modern lifestyle, current fashion trends and advanced weatherproof textiles mean that not all of us possess a traditional winter coat, but in the past a warm woollen cloak, mantle or sturdy overcoat were considered essential items in the outdoor wardrobe.

In the eighteenth century men purchasing winter outerwear or who had outdoor garments provided as livery typically wore a protective overcoat called a surtout or greatcoat. Similar to the regular suit coat worn underneath but cut more generously, this capacious garment was tailored from heavy, closely-woven woollen cloth which was almost impermeable in the days before the development of waterproof fabrics. It had a single- or double-breasted fastening, full calf-length skirts and a broad, cape-like collar with a small inner collar that closed around the neck. The late-Georgian and Regency greatcoat often featured several deep, overlapping collars or shoulder capes, fashionably emulating the coachman’s coat, but also providing extra warmth. During the early-1800s greatcoats inspired by eastern European styles were much in vogue, ‘Polish’, ‘Hungarian’ and ‘Russian’ coats being lined or trimmed with fur and decorated with frog fastenings and braiding.

In the early-mid Victorian era many new overcoat styles were developed, reflecting the growing need for diverse garments for different occasions. These bore a variety of names, although many were similar in style and were referred to by the generic term ‘paletot’, denoting forms of easy-fitting jacket and short wide overcoat. An alternative coat was the Inverness, designed in the mid-1800s mainly for travelling and combining a cloak and coat: usually made of tweed, it was a loose knee-length overcoat with wide sleeves, an extra deep shoulder cape its chief identifying feature. The Ulster, another popular travelling garment, was introduced by J.G. M’Gee and Co. of Belfast in 1867 and was widely worn by the 1870s - a long, belted coat of stout woollen cloth with a detachable hood and sometimes an extra shoulder cape and fur lining. The smartest overcoat was the Chesterfield, which by the late-1800s reached well below the knee. By contrast the late-Victorian Covert coat was a short, natty version of the Chesterfield or Raglan coat (cut without a shoulder seam), favoured for outdoor sports like riding and shooting.

Throughout the nineteenth century tailors were concerned with the question of effective waterproofing. Charles Macintosh had patented his ‘India rubber cloth’ in 1823 and soon cloaks and capes were being made of the new material, despite its stiff texture and unpleasant smell. Home-made waterproofing techniques were also employed, using different recipes, and over time various types of waterproof cloth were trialled for outdoor garments, reaching a relatively high standard by the early-1900s. In the Edwardian era a new weatherproof garment was developed for travelling in early open cars – the motoring or duster coat. Generally made long and loose-fitting, for winter this was often fashioned from tweed, Irish frieze (a heavy, napped woollen cloth) or from leather, with fur lining. The First World War significantly influenced the design of men’s overcoats: for example, the ‘British Warm’, a short, easy-fitting double-breasted coat of Melton cloth replaced the standard military officer’s greatcoat and was afterwards adapted for civilian wear. Also during the war Thomas Burberry devised a practical coat for trench warfare, tailored from a twilled cotton gabardine chemically treated to repel water, but which allowed the fabric to ‘breathe’: subsequently the trench coat became a popular raincoat, manufactured by firms like Burberry and Aquascutum. During the 1920s smart Chesterfield coats and more casual Raglan coats remained fashionable and in the 1930s and 1940s belted coats became looser-fitting and square-shouldered, following the wider, boxier styles of the period. During the Second World War the hooded duffel coat, originally a thick working garment (the ‘convoy coat’) used by the Navy since WW1, was popularised by Field-Marshal Montgomery: after the war, government surplus supplies were sold off and during the 1950s, when launched commercially, the inexpensive duffel coat became fashionable with the young generation.

During the Georgian era the principal female outdoor garment was a capacious cloak. English countrywomen traditionally wore a scarlet hooded woollen cloak (immortalised in the folk tale, Little Red Riding Hood), winter cloaks sometimes being lined or edged with fur. Regional variants included the ‘whittle’ of Somerset, Devon and Cornwall, also called the ‘West Country rocket’ – a length of coarse fringed woollen cloth, similar to the shawls worn by Welsh women. Shawls were another common outdoor covering - lengths of woven cloth that could also be arranged over the head. The luxury lightweight but warm Kashmir shawl, introduced from northern India, became highly fashionable in the early-mid 1800s, cheaper versions later being manufactured in Britain. Even when outmoded, coarser, homespun shawls remained common amongst countrywomen and were retained particularly in Irish, Scottish and Welsh communities well into the twentieth century.

Sleeved garments were also worn outdoors, when fashion permitted. Regency styles included the short Spencer jacket, which fitted over the bodice of the high-waisted gown, and the longer pelisse coat, often edged with a warm fur collar and hem. By the mid-1800s either a full-length woollen or velvet cloak or a half- or three-quarter length cape or mantle was worn over wide crinoline skirts: some styles were semi-fitted or had sleeves and each bore a different name although the terms pardessus and ‘paletot’ were generally used. During the late 1870s and early 1880s, when the fashionable line was slender, long fitted coats were fashionable, including the revived pelisse coat, while for country wear more practical, substantial styles were worn, including a female version of the Ulster overcoat. A new semi-fitted mantle-like coat was devised in the 1880s - the ‘dolman’, expertly cut to complement the projecting bustle skirt, while wide capes were popular during the 1890s due to the puffed ‘leg-o’-mutton’ sleeves. In the early-1900s female dress in general became more functional and there was less differentiation between male and female outerwear, although a full-length fur coat became increasingly affordable for working women. Between the wars women adopted calf-length belted mackintoshes and smart tailored overcoats and during the Second World War in the true spirit of ‘Make-do and Mend’, winter coats were fashioned from whatever materials or old garments were to hand, including dressing-gowns and men’s overcoats. 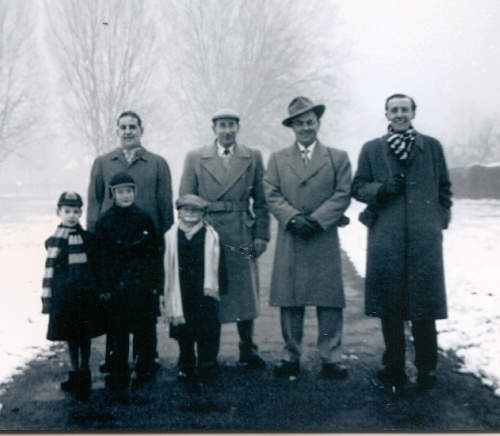 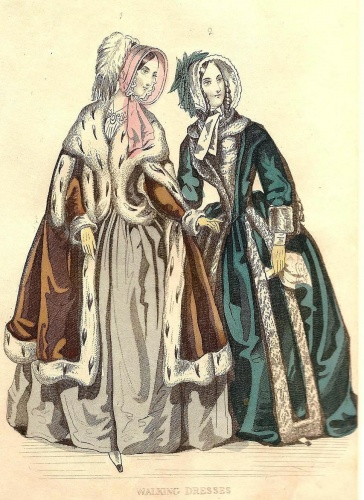