VJ Day Celebrations The World at Peace at Last! 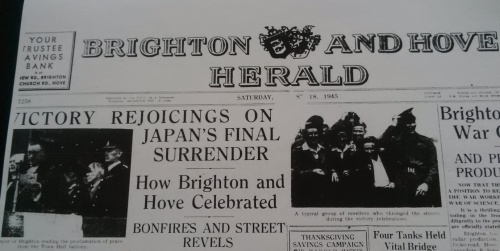 Brighton and Hove Herald, Saturday 18th August 1945. Surrender came after atomic bombs had been dropped on Hiroshima and Nagasaki and the Russian declaration of war and invasion of Manchuria.

Although the war in Europe ended in May 1945 it continued in the Far East. And while Britain was busy with street parties and bonfires to celebrate VE Day, British and Commonwealth troops were still fighting in Burma, Singapore and Thailand and thousands of POWs continued to live and die in horrendous conditions.

The Royal Sussex 9th Battalion was involved in this immensely slow and costly fight. They went to Burma in January 1944 and fought against the Japanese for the rest of the campaign. Local boy, Sergeant R. Cadwallader (Portslade), was awarded the Military Medal for his gallantry. In 1945, the 9th Battalion was withdrawn to India and then to Malaya, where they took the surrender of all Japanese troops.

The surrender came on the 14th of August 1945. At midnight the Prime Minister, Clement Atlee, confirmed the news in a broadcast, famously stating, “The last of our enemies is laid low.” The next day, Wednesday the 15th, was celebrated as VJ (Victory over Japan) Day and a two-day holiday was announced.

Reuters reported, “Rejoicing and festivities are taking place in the jungles of Burma, on warships in Japanese waters, at airfields on Pacific island bases, throughout Europe, Asia and Africa.” In Brighton, Australian, New Zealand and Canadian servicemen joined with the “gay throng” in some pretty serious revels! The headline in the Brighton Herald (18th August 1945) reads: “Brighton and Hove celebrated the victory over Japan and final peace by a demonstration of joyous abandon”. The Royal Pavilion grounds were festooned with coloured fairy lights and the buildings were floodlit, as were St Nicholas Parish Church, the War Memorial in the Old Steine and Electricity House (now the RBS).

Jane Bardea, who was 11 years old at the time, still clearly remembers VJ Day. “Sally, Mummy, Grandma and I were in Brighton, on holiday… We stayed at Mrs Harman’s boarding house in Kemptown... It was our first holiday since 1939. On VJ Day night, the Royal Pavilion was lit up with coloured lights, exciting after the years of blackout, and there were servicemen of all nationalities dancing around the Steyne Square fountain, which was also lit up.” Dance music was broadcast through the air-raid loud-speakers and community singing, which originated in the Dome with Douglas Reece at the organ, was relayed all over the town. At the clock tower in North Street a solid mass of people created, what a contemporary commentator called, “a great din”.

Sites for dancing were hastily prepared and illuminated on the Royal Pavilion lawns, on the Aquarium sun terraces, and at Moulsecombe, Rottingdean, Patcham and Whitehawk.

Mammoth bonfires were lit on Hove and Brighton beaches on both Wednesday and Thursday nights. Nearly 200 Corporation deck-chairs “perished” in the flames and no fewer than 18 beach huts, on the east side of the West Pier, were consigned to the same fate.

Such good humour may not have extended to Mighell Street, where a victory bonfire turned into an inferno and totally wrecked the premises of Freeman and Co, sack and rag merchants.

Fireworks were thrown among the crowds and a number of minor accidents resulted, but reading through local newspapers of the time, there is no reference to any major casualties. I did, however, come across one report of a lorry driver found slumped against the wheel in Marine Drive, Ovingdean, having had “more than he realised celebrating victory”. The judge fined him £5, but because of the exceptional circumstances, did not take away his driving licence. The Constable on the scene said the accused was sitting in his lorry “grinning”.

It was possibly a slightly more sober crowd that gathered to hear the proclamation of peace by the Mayor, Councillor A V Nicholls, from the beflagged balcony of the Town Hall. He spoke of his gratitude and profound sympathy to all whose relatives had fallen and added a sincere wish that all who had fathers, husbands or sons in the Far East would soon have a happy reunion. He voiced thanks to the inhabitants of the town who, he said, had shown inestimable courage during the years of war. He acknowledged their generosity, particularly to the Red Cross, the Prisoners of War and War Savings campaigns. Turning to the deeds done in the Far East, he said: “It is our especial pride that in the Far Eastern theatre of war the Royal Sussex Regiment has added to its past honours and glorious traditions”. Sunday the 19th of August was given over to hangovers, children’s sports, fancy dress parades and thanksgiving services. The Mayor and Corporation attend matins at St Peter’s Church and an inter-faith service was held at the bandstand on the Western Lawns in Hove.

Over the years, VJ Day celebrations have fallen out of favour, apparently, due to concerns about them being offensive to Japan, as well as ambivalent feelings toward the nuclear devastation of Hiroshima and Nagasaki. But this year is special - it is 70 years since Japan surrendered; 70 years since British and Commonwealth troops, still fighting or in POW camps, knew the endless nightmare was over and they could go home.

A national programme of commemoration is planned this August. Locally, a service is being held at Easthill Park War Memorial in Portslade on Sunday 16th of August, organised by the Java Far East Prisoners of War Club and Portslade Royal British Legion. 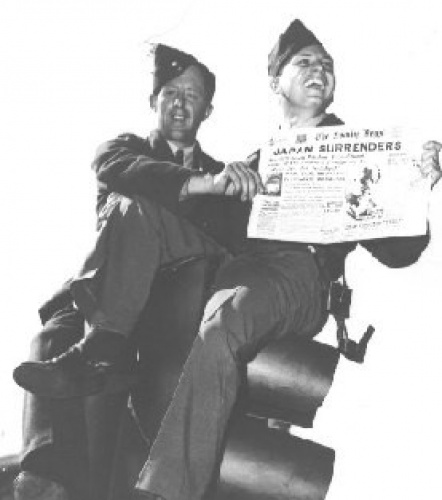 Royal British Legion. King George VI addressed the nation and the Empire in a broadcast from Buckingham Palace: "Our hearts are full to overflowing, as are your own. Yet there is not one of us who has experienced this terrible war who does not realise that we shall feel its inevitable consequences long after we have all forgotten our rejoicings today."

Evening Argus, Thursday 16th August 1945. “The surrender of Japan has brought to an end six years of warfare which has caused untold loss and misery to the world” (King George VI). 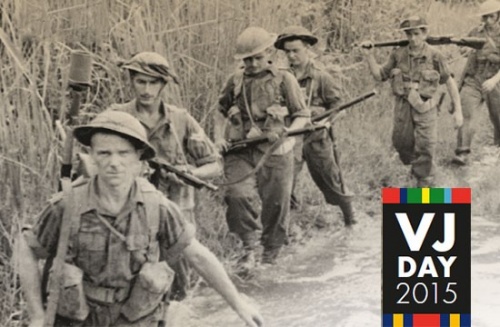 Royal British Legion. The Far East campaign had been the longest of the war. Continuous fighting raged for three full years. British Forces in the Far East had no leave during which they could go home. They were there for the duration; their only hope of seeing England was in victory. 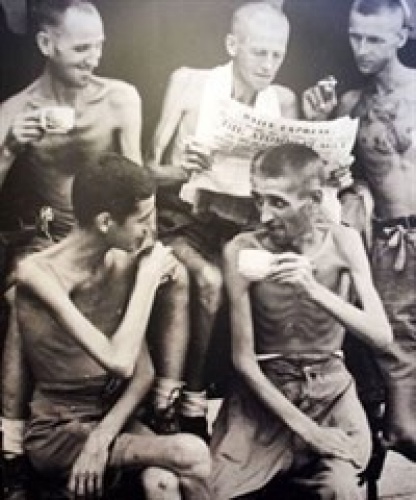 Royal British Legion. Around 300,000 soldiers in the Far East became prisoners of war (FEPOWs); only 200,000 survived. Life for them had been extremely hard. The prison camps were infamous for harsh treatment. Torture and executions were commonplace. Food was strictly rationed. All the prisoners suffered with diseases such as malaria, beri beri and dysentery. Japanese surrender was their salvation. 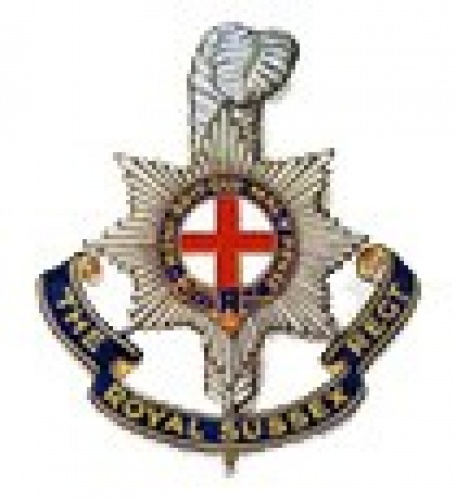 Royal Sussex cap badge. Brighton was the first town in Sussex to grant the Regiment the Honorary Freedom of Brighton on 27th October 1944.