Vinegar Valentines A Licence to Misbehave 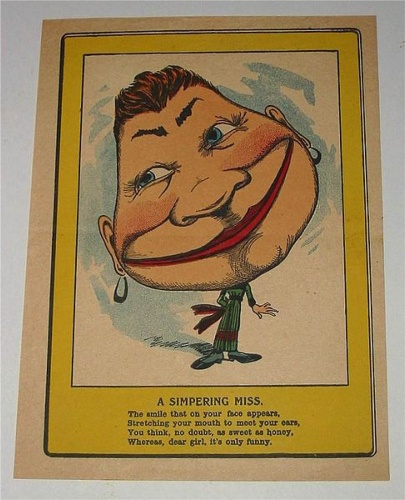 The Victorian’s love of syrupy sweet, glittery valentine’s cards is well known, but what is not so well documented is the 19th century ‘craze’ of sending vinegar valentines.

These cards were not designed for flirtation or declarations of love, their intention was to reject, criticise and generally hurl abuse and they were hugely popular during the Victorian period.

Vinegar valentines were cheaply printed on a single sheet with an image and short caption or rhyming verse containing a range of insults. The recipients might have been nagging wives or unfaithful lovers, equally they could have been lazy employers or lonely and lovelorn neighbours. Worse, they were not always sent as a one-to-one, anonymous communication, the terms ‘we’ and ‘everyone’ appearing in some insults suggest a collective voice and the cards being sent by a group of people.

Flora Thompson, in her fictionalised memoir, Lark Rise to Candleford received such a card, featuring a crudely-drawn caricature of a postmistress and including a verse commenting on her perceived ugliness. Thompson promptly threw the card on the fire, and like other postmistresses did her best to confiscate those she saw as unfit to be mailed.

But despite this censorship, before the advent of stamps when letters were paid for on delivery, the postal system did in fact add injury to insult by requiring the recipients to pay for their abuse! 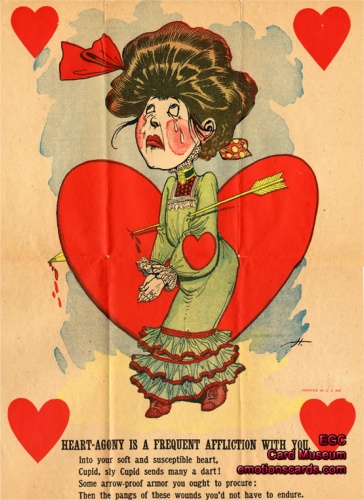