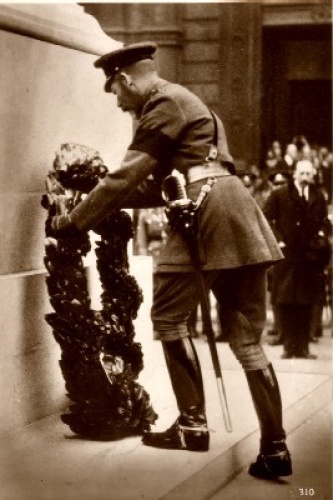 A few years ago I met a man who planned to write a book about all the war memorials in Sussex. He wanted to record where the county’s war memorials were and attempt to put faces and personalities to the names inscribed on them. A huge task and, as I found out when I tried to look at the Book of Remembrance at St Peter’s Church, not an easy one.

What I wanted to see was the record of names of those who fell in the two world wars and the individual and group memorials to those who died during the Boer War. However, after circling St Peter’s several times and being unable to find an open door, I gave up and went down to the Old Steine to visit Brighton’s three most central war memorials. Firstly the memorial designed by John W. Simpson in the style of a Roman water garden. This was unveiled in 1922 by Earl Beatty, Admiral of the Fleet, and bears the names of 2,390 Brighton men who died in the Great War. In front of this is the marble obelisk erected by officers and men of the First Battalion, Royal Sussex Regiment. It commemorates comrades who died of wounds and disease in the Egyptian campaign of 1882 and the Nile river expedition of 1884-5, which tried to relieve General Gordon at Khartoum. Lastly the new, and rather smaller, memorial for people who have died serving their country since the Second World War.

Services will be held here on Remembrance Sunday just as they will in London where veterans young and old will march passed the Cenotaph which stands in the centre of the road towards the Westminster end of Whitehall. For the first anniversary of the armistice in 1919 it was built of wood and plaster, but the memorial you see today was designed by Edward Lutyens and was created from Portland stone. The inscription reads, ‘The Glorious Dead’. It was unveiled on Armistice Day 1920, the same day the funeral of the Unknown Soldier took place in Westminster Abbey.

Unbelievable care appears to have been taken to ensure the identity and origin of the chosen soldier remained unknown. On 7 November 1920, an officer and two other ranks were sent to cemeteries in the main British battle areas on the Western Front – the Aisne, the Somme, Arras and Ypres. Their instructions were to choose a grave marked ‘Unknown British Soldier’ and exhume the body.

The disinterred bodies were driven to GHQ at St Pol-sur-Ternoise, each party having been allocated a different arrival time to ensure that they were unable to confer. The corpse were then re-examined to ensure they were British and that no means of identification could be found. They were then covered by union flats and laid in the chapel. At midnight Brigadier Wyatt and Lieutenant Colonel Gell entered the chapel and Wyatt selected one of the corpses at random. The two men then transferred the chosen remains to a pine coffin and screwed down the lid.

The following morning, chaplains of the Church of England, the Roman Catholic Church and non-conformist churches held a service and at noon the body was sent in a ‘battled-scarred ambulance’ to Boulogne.

That night a consignment of sixteen barrels of French soil from the Ypres salient was sent to London ready to be placed in the tomb, ‘so that he might lie in the earth so many gave their lives for’.

On 9 November the coffin was placed inside another made of oak from Hampton Court and wrapped in the flag that Reverend David Railton had used as an altar cloth during the War (known as the Padre’s Flag). Within the wrought iron bands of the coffin which, in deference to Lloyd George, had been sent to Caernarvon to be finished by Welsh craftsmen, was placed a 16th century crusader’s sword, sent by the King, ‘a soldier’s gift to a soldier’. An iron plate in the shape of a sixteen century shield bore the inscription ‘A British Warrior who fell in the Great War 1914-1918 for King and County’.

The ship chosen to carry the body across the channel was the destroyer HMS Verdun, sent by the Admiralty as a tribute to the French people and their armies at Verdun. On arriving at Dover the coffin was taken by train to Victoria Station where it rested overnight.

Early on 11 November the coffin was placed on a gun carriage, drawn by six black horses and taken first to Whitehall where the Cenotaph was unveiled by King George V, and then to Westminster Abbey. It was borne to the west end of the Nave through a guard of honour of 100 holders of the Victoria Cross, watched by invited guests chosen by ballot from the millions of bereaved families. After the service, trumpeters sounded Reveille and the Last Post; the grave was covered by the Padre’s flag and the procession of mourners began. Each person perhaps imagining ‘The Unknown Warrior’ was his or her missing son, husband or father. The grave was closed on 18 November and covered by a temporary stone. This was replaced by the present black Belgian marble stone in 1921.

The idea for such a burial came from David Railton, a chaplain stationed at the Front, who had seen a grave with a rough cross on which were pencilled the words, ‘An Unknown British Soldier’ in a back garden in Armentières. Today it stands for all those who have no other memorial.