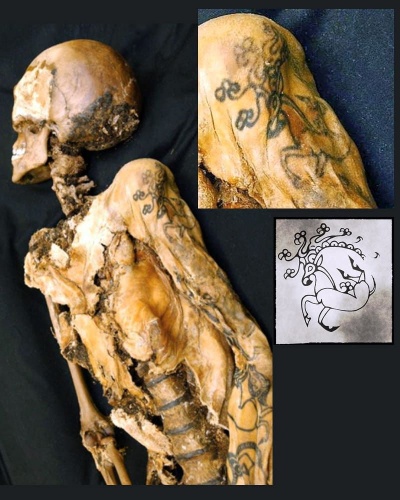 Today in Brighton tattoos are everywhere and we have several established tattoo studios. Although not always so fashionable as they are today, tattooing dates back millennia, both scar tattooing and primitive puncture tattooing being practised since Neolithic times. Early tattoos may sometimes have had a medicinal function: the mummified body of Otzi, ‘the Tyrolean Iceman’ (4th century BC) had multiple small markings apparently created by cutting the skin and rubbing in charcoal; concentrated around joints and the lower back, their locations suggest the relief of rheumatic pain, possibly an early form of acupuncture.

Prehistoric man had the skills to permanently pattern the skin and tattooing advanced globally, as evidenced by tattooed mummies recovered from some 50 archaeological sites, including Alaska, Siberia and Mongolia, China, Egypt, Sudan, the Philippines and the Andes. The best-preserved and most elaborate of all ancient tattoos decorated the bodies of the 2,500-year-old Siberian ‘Ukok Princess’ and two warrior-like males found high in the Altai Mountains in a frontier region where Russia borders Mongolia, China and Kazakhstan. Believed to be nomadic Pazyryk people, their colourful body artwork comprising diverse animalistic motifs aimed to identify the Pazyryks in life and to help find one another in the afterlife, different designs expressing social position, even personal thoughts.

Puncture tattooing as we understand it today was also practised elsewhere, for instance in Ancient Egypt 4,000–6,000 years ago, where tattoos were associated with dancers and musicians, whose line of work involved visual display. Another Egyptian custom was a net-like pattern across women’s stomachs, perhaps a protective device safeguarding an unborn child, the net expanding as pregnancy advanced, symbolically securing the infant in the womb. In Europe, the ‘barbarians’ on the fringes of the Roman Empire, including the tribes popularly called Celts or Ancient Britons, knew how to make an impact. Britons used woad (a rich blue dye obtained by fermenting the leaves of the cabbage-like plant) to dye clothes, and paint or, quite likely, tattoo their skin. By the 3rd century AD the continuing British taste for tattoos was noted by late-Roman writers, their markings different to those of the tattooed Tracians of southern and south-eastern Europe.

Christian influence expanded in the following centuries and some historians assert that the Bible prohibits tattooing, although the usual citations are open to interpretation. Either way, the ‘pagan’ tradition of woad and conspicuous warrior display continued in early-Medieval Europe, various Norse, Teuton and Saxon tribes all using tattoos, along with abundant jewellery. As late as the 10th century, the Viking Rus - Scandinavian and Slavic peoples trading and raiding around the Baltic and Black Sea area - sported tattoos, the Arab Muslim traveller Ibn Fadlan observing that: ‘Every man is tattooed from finger nails to neck with dark green… or blue-black trees, figures, etc.’ Additionally, several small archaeological finds are believed to be tattooing needles, including items from Sloinge in Sweden, dating to c.AD 400-1000.

During the 11th-13th centuries reportedly soldiers from the Crusading armies when arriving in the Holy Land occasionally had crosses and other Christian symbols pricked, painted or otherwise marked on their arms, to ensure that if they died overseas their bodies were identified as Christian. Later, 17th century pilgrims to Jerusalem favoured similar markings, but otherwise there are no known references to tattooing throughout the developed world. The now-powerful medieval Church actively denounced the ‘barbaric’ practice of puncturing and permanently colouring the skin, tattooing becoming widely regarded in the Christian West as the sign of a heathen.

Centuries passed before the ancient practice of tattooing was re-introduced into Europe, through advanced sea travel and exploration of distant lands. In 1691 explorer and navigator William Dampier brought to London a native of New Guinea who had a tattooed body, dubbed the “Painted Prince”. Between 1766 and 1779, Captain James Cook made three voyages to the South Pacific and when he and his crew returned from Polynesia, they recounted vivid tales of ‘tattooed savages’ there. In Tahiti, aboard the Endeavour in July 1769, Cook first formally noted the body modification characteristic of the local people, his observations being the first recorded use of the word ‘tattoo’ to describe permanent skin markings. In the ship’s log book he wrote: “Both sexes paint their Bodys, Tattow, as it is called in their Language. This is done by inlaying the Colour of Black under their skins, in such a manner as to be indelible.” Cook continued: “This method of Tattowing I shall now describe... As this is a painful operation, especially the Tattowing of their Buttocks, it is performed but once in their Lifetimes.” Deriving from Tahitian tatau, the word ‘tattoo’ in this sense was absorbed into the English language following Cook’s expedition.

After one voyage Cook returned with a tattooed Raiatean man, Omai, whom he presented to King George III. Significantly, Cook’s Science Officer and Expedition Botanist, Sir Joseph Banks, and many crew members also came home with tattoos of their own. Georgian seamen and sailors had begun a tradition that rapidly spread to ports around the globe and tattooing now became popularly linked to men of the sea. Progressively, sailors’ tattoos gained a powerful symbolic language of their own: often souvenirs of places visited and experiences gained, recognisable pictures enabled foreign sailors to understand one another, even when speaking different languages. Some tattoos signified achievement, a swallow being earned for every 5,000 nautical miles travelled; others were lucky talismans, like the nautical star tattoo, always guiding a sailor home.

During the 1800s, while still chiefly associated with sailors, tattoos were also becoming common in working-class communities and among criminals, reinforcing the widely-held view that tattoos represented the marginalised, those living on the fringes of society. However, reportedly Victorian public school boys also practised amateurish tattooing on one another and by the late-19th century key members of the aristocracy had gained tattoos. Indeed, tattooed members of European royal families in the early-20th century included Britain’s Edward VII and King George V, Kaiser Wilhelm II and Tsar Nicholas II of Russia, their tattoos typically ornate depictions of the Royal family crest or coat of arms. Nonetheless, complex and conflicting theories about tattoos, class and membership of undesirable organisations continued to circulate - and not only in Britain, where in 1969 the House of Lords debated a bill to ban the tattooing of minors due to its perceived links with crime. In Japan, where tattoos once identified the feared Mafia-like Yazuka mobsters, despite the lifting of an official ban in 1948, tattooing remains a stigmatised art, those with tattoos being denied access to certain jobs and prohibited from entering public buildings.

Love them or hate them, tattoos have been part of human history for thousands of years. Over time and in different places, various tattooing techniques have been used. Primitive methods could be excruciatingly painful, multiple tattoos considered an act of great bravery. Sometimes tattoos have caused blood poisoning, allergies and other health issues. Modern, hygienic equipment is used today by reputable professionals, but potential risks should be understood. Meanwhile, the vogue for tattoos is thriving among young and middle-aged men and women here in Brighton and we’ll be seeing many more with the springtime sunshine.