A Short History of Seaside Photography 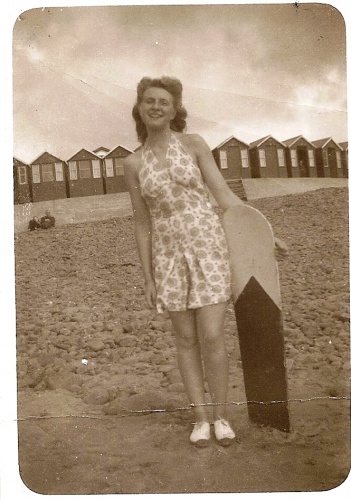 Family snapshot: Most British beaches were closed during WW2 but afterwards holidaymakers soon returned, as seen in this snapshot of a teenager with ‘surf rider board’, dated 1946. Jayne Shrimpton

Readers may already know David Simkin who hosts the websites Brighton Photographers, 1841-1910 at http://spartacus-educational.com/Brighton-Photographers.htm and Sussex Photo History at http://photohistory-sussex.co.uk/ These impressive online resources based on many years’ research provide comprehensive information about Victorian and Edwardian commercial photographers operating throughout East and West Sussex.

By the 1860s when portrait photography reached a mass market with the neat card-mounted carte de visite print, dozens of studio photographers were operating throughout our ‘city by the sea’, with major thoroughfares like St James Street, Kings Road, Western Road and North Street each boasting several establishments and further studios located in Lewes Road, East Street, Preston Street and elsewhere. The steady expansion in studios throughout Brighton & Hove, in neighbouring resorts and seaside towns generally, during the later 1800s, reflected the rising demand for photographic likenesses among both residents and the many visitors arriving during the holiday season. Victorian tourists may have visited a local studio if they were celebrating a special occasion such as a birthday during their seaside sojourn, or perhaps simply to have a visual memento of their visit. Over time many coastal studio photographers provided picturesque painted backdrops suggesting the sea or beach and props evoking a nautical theme or leisurely holiday air - the contrived deck of a boat, rocks, ropes, a deckchair or child’s bucket and spade.

Open-air photographs were also available as early as the 1850s/1860s from outdoor practitioners who set up their camera and darkroom apparatus at strategic points along the shore. Many early beach photographers were itinerants using the collodion positive process that could create a finished photograph in just a few minutes; thus they were able to offer inexpensive ‘while-you-wait’ portrait souvenirs to day-trippers and holiday-makers – either glass collodion positive or ambrotype photographs, or images on enamelled iron called ferrotypes or, more popularly, tintypes. The production of cheap on-the-spot photographs portraying their subjects leaning against a boat or riding a donkey earned beach photographers something of a poor reputation in their day as vulgar showmen peddling low forms of entertainment, while the photographic establishment condemned their work as inferior and inartistic. However surviving beach ambrotypes and tintypes are now, justifiably, finally becoming acknowledged for their aesthetic, technical and cultural value, and their historical documentary significance.

Glass ambrotypes were a nineteenth-century photographic format, obsolete by the 1890s, but tintypes enjoyed enduring popularity, from the 1870s when they first became fashionable in Britain, until around the 1950s. Later tintypes dovetailed with the diverse light-hearted beach photographs of the early-mid twentieth century that expressed the bustle, gaiety and continuing lure of British holiday resorts in the days before affordable foreign package travel: seaside postcards, promenade ‘walking pictures’ and amateur family snapshots. Divided-back postcards, devised and authorised for postal communication in 1902, began to be used by professional portrait photographers in the early-1900s, these ‘real photo postcards’ (as they are sometimes called) remaining fashionable for almost 50 years until c.1950, their heyday the 1910s-1930s. Often described as the most ‘democratic’ form of photograph, postcards are extraordinarily varied and portray people from all walks of life in both artificial studio settings and in outdoor locations. Studio photographers in seaside resorts continued, ironically, to create the illusion of sand and sea in their sets, even when wheeling gulls could be heard outside the window. As social conventions relaxed over the years, some offered humorous themes reinforcing the holiday spirit, including the vision of the head protruding through a hole in a cartoon, thereby transforming respectably-dressed studio clients into voluptuous bathing belles.

One type of holiday postcard often found in family photo collections is the street scene or ‘walking picture’ – a candid photograph of an individual, couple or group snapped unawares as they strolled and chatted or admired the view on the pier or esplanade. Called ‘walkies’ in the trade, these inimitable photographs captured their unsuspecting subjects literally in mid-step, clutching cardigans, bags and newspapers as they headed to the beach, enjoyed the promenade or drifted back towards their lodgings and were the work of photographers operating at coastal resorts the length and breadth of Britain, from Brighton to Bridlington, Littlehampton to Lowestoft, Margate to Morecambe. Once customers were snapped, the photographer, usually a seasonal operator working for a chain such as Sunny Snaps or Wrates Happy Snaps, handed a docket with a negative number and details of the company’s kiosk so that the subjects could, if wished, collect a print of their photograph later that afternoon or the next day. The first ‘walking pictures’ date to c.1919 and they reached their zenith during the 1930s and 1940s, although a few were produced as late as the 1960s/1970s. Many are postcards, but others are variable prints, some presented as a narrow strip of sequential images, like frames of a film.

Stiff competition existed among professional seaside photographers. Some enjoyed long careers but many came and went, further challenges to the trade arising when automated coin-operated photo booths appeared in Britain in the late 1920s and with the gradual rise of the amateur photographer. Following the launch of user-friendly box and folding cameras, amateur photography began to advance during the early 20th century, with many people acquiring personal cameras between the wars. After the Second World War, camera ownership was widespread, enabling individuals and families to take their own casual snaps as souvenirs of day trips and annual seaside holidays. As a result, by the 1960s the commercial beach photography that had been a familiar part of visiting the seaside for around a century was in serious decline and would soon be little more than a nostalgic memory. This is why our old family holiday photos are so fascinating and important: they provide a wonderful glimpse of earlier generations at leisure and showcase the work of many thousands of photographers who form part of our seaside history. www.jayneshrimpton.co.uk