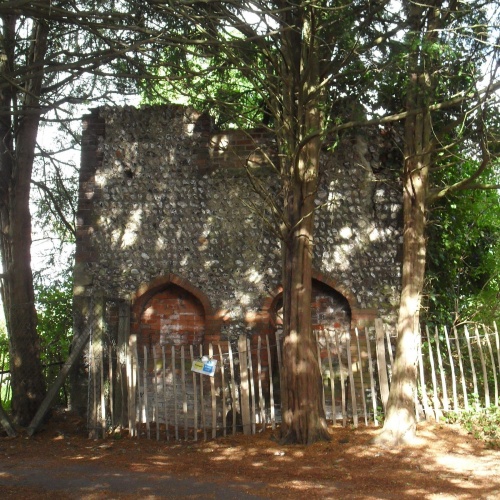 Preston Manor is so familiar to us, along with its walled garden, croquet lawn, flint walls and pet cemetery that we think we know all about it, but there is a part that often escapes attention: the old well house.
This is located to the east of the house, a knapped flint structure built in 1818 to house a well that was sunk in 1552. The well was originally the only water supply the Manor had and it continued to be used until 1872 when Brighton Corporation Water Works began to supply Preston.

Over the year, the well house has seen many changes. It started as just a square building with a pitched roof; later a second building was added to the east, butting up to the existing structure; another storey was built with a flat roof and castellations on top of the walls. A dovecote was set into the building on the east side and also a small door. Local historian, Dennis Manville, who has spent many hours uncovering what lies behind the bricked up windows and arched doorways, believes that the donkey used to work the well was kept here.

Machinery for the well was installed in 1840-50 and consisted of a large capstan that had a beam to which the donkey was attached. Below the capstan, running down to the bottom of the well, were two long cast iron piston rods and, as the donkey walked around the well, the machinery at the top turned causing the rods to move up and down alternately, this pumped the water up a large pipe to the second floor where it flowed into a storage tank. Staff from the Manor then had the arduous task of collecting the water from the tank and transporting it back to the house.

Today the well house stands in very poor condition. The wall to the east has gone, in fact half the building has gone, but the machinery and capstan are still in place, albeit in a bad state. Unfortunately at this time of “cuts” such a building, hidden from view, is unlikely to receive any attention from the Council. Shame isn’t it?

Thanks to Messrs D Manville and L Keen for providing all the above information.