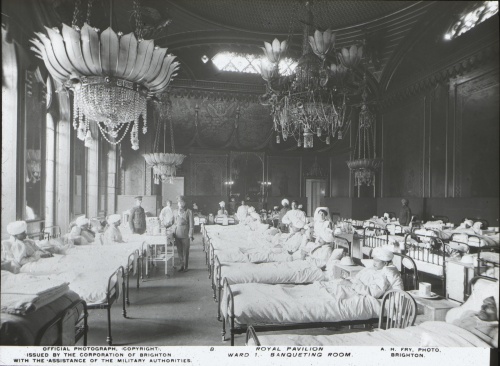 I have tried to think when I last visited the Royal Pavilion. I suppose my first visit was in the 1980s when we came to live in Brighton and then again in the 1990s when our children were small. In those intervening years nothing much had changed. The glittering chandeliers, sumptuous furnishings and exotic decoration were all still there, but nothing new appeared to have been added and I guess that is why I have not ventured back. Now there is a reason, a new permanent exhibition has just opened, charting a fascinating chapter in palace’s history.

The Royal Pavilion as an Indian Military Hospital is, in truth, a fairly modest display, but it covers a really big subject. It tells the story of the thousands of Indian and Gurkha soldiers who arrived in France in the Autumn of 1914, unprepared and ill-equipped for the climate, injured in the defensive lines of the Western Front, brought to Brighton for medical treatment and how they were treated by the government, the town and the local people. “Generations of Brightonians yet unborn will marvel in reading of these days”. (Sussex Daily News, 23 November 1914.)

Brighton had the greatest concentration of Indian military hospitals in the country, established in what had been the workhouse, renamed the Kitchener Indian Hospital (now Brighton General Hospital); the York Place and Pelham Street Schools; and the Royal Pavilion including the Dome and Corn Exchange. In December 1914, when the ambulance trains brought the first injured soldiers to Brighton, local people turned out to cheer them and, no doubt, wonder at such a strange sight.

The care taken in converting the three buildings on the Royal Pavilion estate into a military hospital for Indian soldiers, the majority of which were illiterate, agricultural workers from the rural north of Indian, is really quite surprising. Indeed, the soldiers themselves were amazed at being cared for in such grand surroundings. In 1915, a patient wrote to a friend back in India: “Our hospital is in the place where the King used to have his throne. The men in the hospital are tended like flowers.”

In the Royal Pavilion the Banqueting Room and Music Room were transformed into wards and the Great Kitchen was used as an operating theatre. Separate water supplies were provided for Hindus and Muslims; there were segregated bathhouses and latrines and an amazing nine kitchens for Muslins, meat-eating Hindus and vegetarians, each with their own cooks. Orderlies from their own caste or religion cared for the wounded and the so-called “untouchables” were provided with a special building on the eastern lawn.

The reason why such scrupulous attention was given to caste sensitivities was entirely political and coincided with Turkey entering the war. The Government needed to ensure, for the future security of the British Raj in India, that the Indian Army remained loyal to George V, both King and Emperor of India. To do this they needed to counter accusations made by the German propaganda machine that Muslim troops, in particular, were not being treated well. They also had to stop the Kaiser from subverting Muslims within the Indian Corps with his suggestions that they abandon the war or, at least, stop fighting other (Turkish) Muslims.

The same need to ensure morale was kept high, both with the troops and in remote Indian villages, was behind the visit to Brighton of King George V and Queen Mary in August 1915. Their visit was the subject of, arguably, the first war propaganda film and showed the royal couple talking to patients and presenting the Victoria Cross to Jemadar Mir Dast. (Incidentally, Mir Dast’s brother, Mir Dost, did defect to the German side and it is rumoured that he was awarded the Iron Cross by the Kaiser!)

Nearly all the 4,000 Indian soldiers treated at the Royal Pavilion survived, only 32 died. The Muslim dead were taken to a specially established Muslim Military Burial ground at the Shah Jehan mosque in Woking. Hindus and Sikhs were cremated on the Downs near Patcham, on a specially built burning ghat; where the Chattri memorial is located today and were, on Sunday 26 September 2010, a new Commonwealth War Graves Commission plaque will be unveiled. This newly commissioned work will list the name, rank and regiment of each of the Hindu and Sikh soldiers (more details in September edition).

The Royal Pavilion Military Hospital for Indian Soldiers closed in 1916, only to re-open the same year as a Military Hospital for Limbless (British) Soldiers. Today it is difficult to imagine it as a military hospital of any description, but this new exhibition manages to bring the extraordinary story to life; giving us the opportunity to consider the political agenda of the day, the truth behind the censored letters and all the smiling faces in the archive photographs and newsreel footage. And….we get half-price admission with proof of residency. 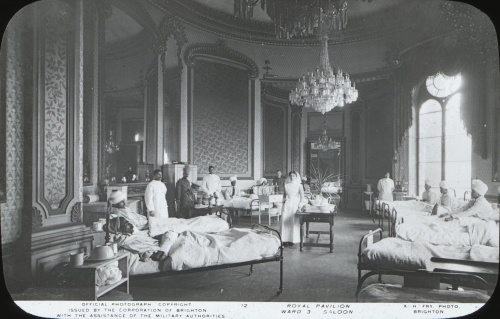 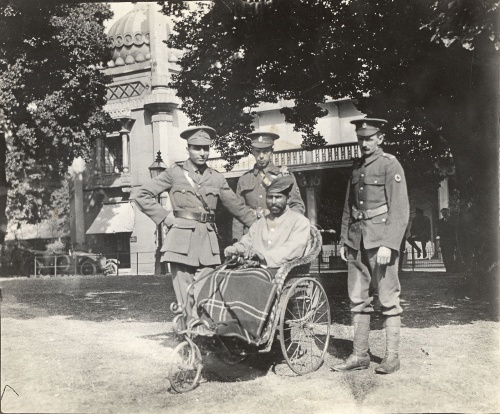 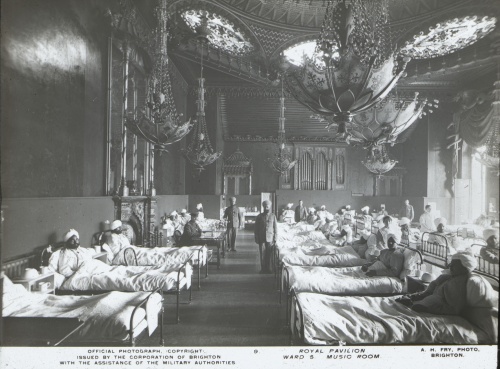