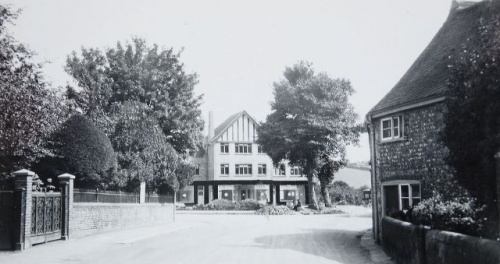 Everyone will be saddened by the news that the two elms at the centre of Patcham Village - that live so close to each other they form a heart-shaped canopy, have to be felled. They attained monumental stature, 70-80 feet, and it is humbling to reflect upon the dramatic changes they witnessed and were part of in Patcham.

Their precise age is unknown, but it is thought they may have been there between 2-3 hundred years, taking up their position in the early 1700s. Their home was the corner of a field, beside the start of a lonely drovers’ track along which animals were walked across the Downs to Lewes market. We know from the 1842 tithe map that there was a large pond near them, making it an ideal and sheltered spot for animals to rest. Wagons would often be left standing in the pond so that their wooden wheels would swell, to stop the rims from coming away.

In those days the Parish of Patcham was much larger than Brighton parish; encompassing Hollingbury, Moulescombe, Withdean and Tongdean. It is an ancient village and for almost its entire history was a small agriculture-based community.

It seems strange today, but Patcham probably came into existence because of a plentiful water supply, a rarity on chalky downland. (In fact, the name Patcham may derive from Old English Peece or Paace meaning watery, splashy, miry.) As well as the ample ponds, there were springs on the lower parts of Church Street, that section then being known as Spring Street, and large springs at Waterhall, together forming the source of the Wellesbourne stream which rose in the centre of the village before running into Brighton, eventually reaching the sea at Pool Valley.

What was there in the earliest days of the elms? Surprisingly, we still know many of the buildings. All Saints is a Saxon church so was there of course - at the end of the cottages in Church Hill, high above the heart of the village and elevated above the large pond it stood beside. Nearby, on the other side of the pond, was the extensive Patcham Court Farm, already 100 years old. This large farm with its massive barns to store the harvest from its 733 acres was owned by the Marquess of Abergavenny from 1439, past the trees’ germination, right up until 1921. As well as providing employment, as the name suggests Court Farm was also where justice was dispensed. The farm’s Dovecote contained 550 nest boxes of birds to provide a change of winter meat for the wealthy. It is a massive structure, possibly to protect them from the peasants who were not allowed to kill or eat the birds, nor even to keep any themselves - despite their enduring the birds ravaging their own crops!

The very impressive Patcham Place pre-dates the elms too; a mansion since 1558, the house was home to a series of movers & shakers. One of the first owners, Richard Shelley, was appointed by the Privvy Council to construct laws & mediate between the fishermen and farmers of Brighthelmstone, who co-existed uneasily with conflicting needs and customs. Anthony Stapely, a highly influential puritan and parliamentarian who bought the estate in 1620, was one of the 59 signatories to King Charles I’s death warrant in 1649! For a period the parish constable took people there to be charged in the presence of a Justice of the Peace - daunting! In 1764, during the elms’ junior years, Major John Paine bought the house. He immediately extended & revamped it, removing all evidence of the 16th century and producing the black tiled house which stands there now. His descendants lived in the house until it was purchased by the Corporation in 1926. Of course folk other than gentry lived in the village; the cottages ran along the east of Old London Road during the elms’ infancy, built with stones picked from the fields. As the 1700s and the young days of the elms progressed Wotton House took its stately place opposite them and the row of cottages in The Square was built. Life bumbled along in what seems like a fairly feudal way of life until 1783, when the Prince Regent first came to town and things began to change for Patcham. By 1800 Brighton was absolutely booming, between 1811 and 1821 it was the fastest growing town in England. Fabulous architecture, ambitious plans and an exciting social scene attracted the wealthy and their servants. The locals in Patcham now had options about how they earned their living, were free to leave the land and make the journey into Brighton. By 1840 the population of Brighton had grown to 40,000 and provided a ready market for Patcham. A thriving horse-drawn trade grew up with Brighton for market gardeners and corn merchants. All these and of course the increased traffic between London and Brighton, passed to and fro along London Road and past our elms.

The trade was a fillip to Patcham. The Old London Road now took the shape we recognise today. It provided the impetus for an Inn (The Black Lion, then in a villa style property at 110-122 Old London Road,) horse dealers, a smithy, latterly garages, Tea Rooms and Tea Gardens. In 1875 Joseph Harris started a Bakery, Corn Merchants and Patcham Telegraph Service..in the same building the Post Office occupies today. Five years later this enterprising man went on to build the Waterhall Mill to make corn for Brighton’s bread.

As Brighton’s population grew, so its residents took to visiting Patcham by carriage and omnibus etc to enjoy the quiet rural atmosphere, picturesque cottages and pond replete with ducks. Tea Gardens and tea rooms abounded for many years. But as the traffic increased and became motorised it finally proved too great and the London Road by-pass was opened up in 1926, prompting the Black Lion to shift location, nearer the fountain and larger premises in 1929.

Meanwhile, the context of life in Patcham had also begun to change. A large land sale in 1921 meant much of the rural land, Patcham’s setting, became available for purchase. Sir Herbert Carden, (Councillor 1895-1941 & Mayor 1916-19) bought thousands of acres when it became available, to sell on to the Corporation at cost. When the boundary changes he co-ordinated brought Patcham within the Greater Brighton area in 1928 rapid development followed. The Drove track became Ladies Mile and the Ladies Mile estate for instance was complete in just four years, 1932-1936

The land that was near the edge of the old village, on the corner at the end of a old country track, where two trees stood, was also to be transformed. Shops were built on the land immediately surrounding the elms in the 1930s and they began to occupy a central position in the modern life of the village.

Perhaps the trees have been most appreciated during these last 80 years. Now set against the buildings their beauty was made obvious and even more welcome. A steady presence, comfortingly massive, giving shade and signaling the seasons. Old and steadfast friends to Patcham and each other.

Had it not been for the disease I am sure they would have stood side by side for many more years. They will certainly be missed. 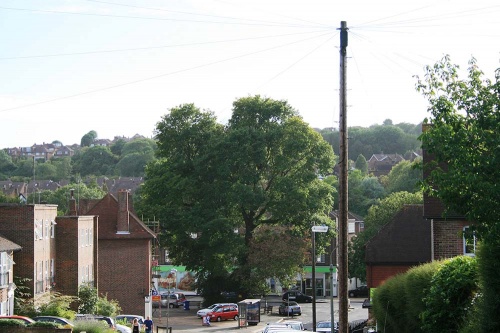