The Oldest Electric Railway in the World 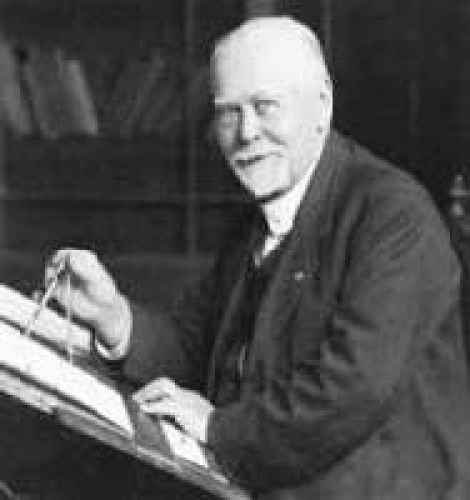 I must confess that I am not a great fan of Brighton seafront during the summer months; in fact, I usually go out of my way to avoid it, humbug that I am. However, this August I might be tempted down to the Banjo Groyne to join in some of the celebrations being held to mark the 125th anniversary of Volk’s Electric Railway - the oldest working electric railway in the world according to the Guinness Book of Records.

Inventor and electrical pioneer Magnus Volk was born at 35 (now 40) Western Road, Brighton in 1851 and he seems to have been a remarkable man. He was the first person in Sussex to have a telephone and electric light, which he installed in his house on Preston Road in 1880. At that time, there was no public electric power supply so he generated his own 50-volt supply using a dynamo. He later installed the first electric light in the Royal Pavilion. When a public electricity supply became available in 1882, Volk was one of the first subscribers. Inspired by Werner von Siemens’ demonstration of an electric railway in the grounds of Crystal Palace in 1881, Volk resolved to build such a line along Brighton seafront. He obtained consent from Brighton Council and opened his two-foot gauge line on 4th August 1883, initially powered by the same dynamo he had used for his own domestic electric lighting.

The first section of line was only 300 yards long, running from the Aquarium (next to where the Palace Pier is now) to the Chain Pier, but it was a huge success. Many considered it a wonder of the age, as they could not see how it worked; there were no horses and no steam. Others were less sure, indeed, one Brighton vicar denounced it as the work of the devil and warned his parishioners not to go near it. Regardless, the single wooden car with striped canvas awning and seats for just 12 people carried 20,000 people in the first 12 weeks.

Realising that he had a hit on his hands, Magnus soon wanted to extend the line and in April 1884 a cutting was made in the shingle to carry the line under the Chain Pier to the Banjo Groyne, about half a mile to the east. This started a whole catalogue of extensions and cutbacks, including an unsuccessful venture eastwards to Rottingdean. The beach east of Banjo Groyne was lower and at high tide was covered by the sea. Volk’s solution was to devise the “Pioneer” (nicknamed Daddy-Long-Legs) an electric car that ran even when the rails were covered by water. This extraordinary railway with its 24 feet long tubular steel legs opened on 28th November 1896, but was destroyed by a terrible storm just six days later. It was, however, rebuilt the following summer and ran for four years.

In September 1901, the year the new Palace Pier was completed, the original line was further extended to Black Rock and the railway reached its maximum length of around one and a quarter miles. In 1930, the western end of the railway was cut back by about 200 yards from the pier to its present terminus, to allow for road widening opposite the Aquarium. The line was cut back again in 1937, this time at the eastern end to allow for the construction of an open-air swimming pool at Black Rock. The new station, which had opened that year, was very short lived, because in July 1940 the government closed the south coast beaches fearing a German invasion and all the station buildings were demolished.

The railway, now owned by Brighton Corporation, remained closed for the duration of the war finally reopening in 1948. New stations were built at Black Rock and Halfway and at the Aquarium terminus an ex-tram shelter, made redundant when the trams closed in 1939, was moved from Victoria Gardens near the Royal Pavilion to the seafront, to form the station building that we know today.

The varnished teak bodywork on the cars has given way to a modern paint job and operating times have been cut but, according to the Volk’s Electric Railway Association, none of the changes made over the years have altered the essential character of the railway. It still runs on its original route with most of its original fleet and if Magnus Volk were to return today, he would still recognise his creation. To be honest, I expect he would be stunned that it has survived so long, especially bearing in mind some of Brighton Corporation’s mid twentieth century seafront planning decisions!

My thanks to Ian Gledhill from the Volk’s Electric Railway Association for his generosity with both information and pictures for this article. 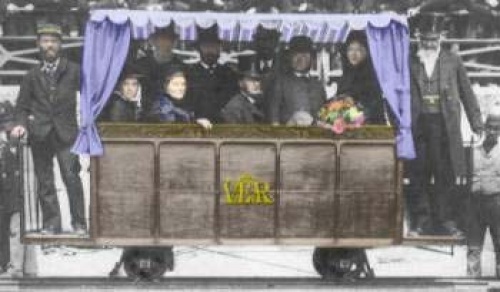 At noon on August 4th 1883 Magnus Volk presented the people of Brighton with his latest creation - an electric railway. Magnus is standing on the left hand platform with the Mayor on the right. 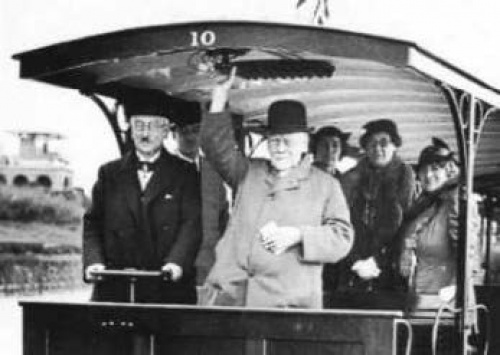 The new Black Rock station was opened on May 7th 1937 when the Deputy Mayor and 85-year-old Magnus Volk took joint control of Car 10 for a journey from the New Station. 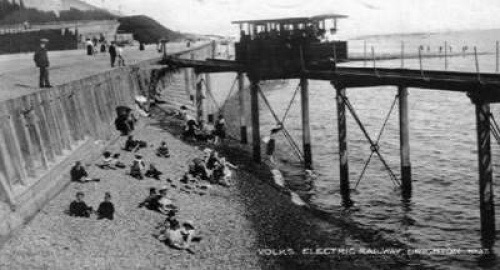 The viaduct seen from the Banjo Groyne. In rough weather, waves would break over the cars and drivers wore oilskins.