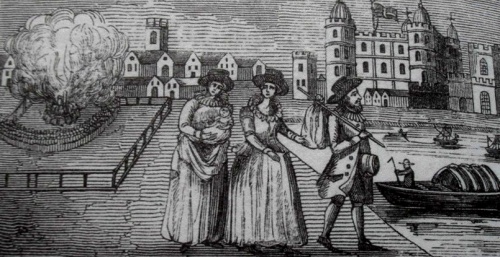 This month our Editor, Joan, has asked me to write about historical aspects of childcare and thought we might focus on how babies have been looked after - or not, as the case may be.

For millennia there have been wet nurses - women employed to breast feed and care for other women’s new-born babies. This was an ancient custom, practised in many cultures, the wet nurse often appearing in mythological and supernatural tales, in human, superhuman or even animal form: for instance, the story of the founding of Rome which involved twin brothers Romulus and Remus, abandoned as babies and nursed by a she-wolf.

In Britain wet nursing has a long history: once a respectable and well-paid job for lower class women, in the 1700s and 1800s a reputable wet nurse could earn a decent income - more than a labouring man. High-ranking and privileged ladies usually hired wet nurses, it being considered unfashionable to suckle their own babies. This may have been largely because they feared breast-feeding would ruin their figure and make it difficult to regain an elegant appearance, as befitted their status. Since breastfeeding generally inhibits ovulation, perhaps some ladies also used wet nurses so that they might quickly conceive again, especially if expected to produce multiple heirs, thereby securing the family line.

Some mothers hired wet nurses simply to avoid the confining and time-consuming task of breastfeeding - or if they could not produce sufficient breast milk, for example following multiple births. Lower-middle and working-class women also commonly used wet nurses until the mid-1800s, particularly for economic reasons. Working women were often involved in running a family business and hiring a wet nurse was cheaper than employing someone to replace them at work. When families were large and labour-saving devices few, using a wet nurse also enabled the mother of a new baby to keep on top of her many domestic chores.

In Britain sometimes a wet nurse cared for the child at her employer’s own home, although, sadly, other infants were sent far away from their families. Sometimes babies from affluent homes were temporarily fostered by families in the village. The novelist Jane Austen and her siblings were cared for in this way, from a few months old (presumably after initial nursing at home) until they were toddlers. Later it became recognised how this creates an emotional distance between child and mother - one of the various factors that led to the gradual decline in such practises during the 19th century.

Other professional wet nurses worked at ‘foundling hospitals’ for abandoned children, so high was the demand for their services. Although a woman could nurse another’s baby without necessarily already producing milk for her own child, many wet nurses working for other women were also new mothers themselves. Sometimes their own baby would be sent out to nurse, often being raised on bottled milk - far more likely to cause illness and infection. As historian Dr Valerie Fildes, explains: “In effect, wealthy parents frequently ‘bought’ the life of their infant for the life of another.”

Historically, professional wet nurses were often highly regarded and well-paid, but the system was unregulated and standards of care varied widely, especially lower down the social scale. In Victorian Britain, many female paupers took in babies for money – typically those on poor relief, and/or who themselves had illegitimate children and struggled to survive. Sometimes they nursed the babies using their own milk, but otherwise gave them whatever was cheapest. This low-grade level of care, or ‘baby farming’ as it was popularly called, might be the only recourse for vulnerable young unmarried mothers without support. Sometimes a daughter’s illegitimate baby was absorbed into the family and raised alongside other children; however in some communities ‘bastard’ offspring were considered an unwanted embarrassment and were put ‘out to nurse’, with no further questions asked.

Payment for this service might take the form of small periodic fees, or, for longer term ‘adoption’, usually a lump sum. For the baby farmer, in the case of lump-sum adoptions it was more profitable if the infant died, since the modest one-off payment would not cover the child’s care indefinitely. Tragically, the system led to extremely high levels of infant mortality. Some unscrupulous practitioners adopted numerous children, simply neglecting to care for them, while a few infamous criminals went to the lengths of murdering the babies entrusted to them. Those tried for murder, manslaughter, or criminal neglect and hanged include the Victorian baby farmers Margaret Waters (executed 1870) and Amelia Dyer (1896). Early-twentieth century culprits were ‘The Finchley Baby Farmers’ Amelia Sach and Annie Walters (hanged together in 1903), the last baby farmer to be executed in Britain being Rhoda Willis, hanged in Wales in 1907.

Legislation during the 1890s strictly limited the activities of women offering child care and in the early 20th century adoption and foster care were gradually placed under state protection and regulation. Additionally, with advanced medical knowledge, by the late-Victorian era new mothers of all social classes were being encouraged to nurse their own babies, both for the child’s wellbeing, and also being advised that breastfeeding would help them to regain their figures. That said, despite a positive shift in this aspect of childcare, for many years breastfeeding was still considered ‘primitive’ or revolting among the aristocracy and upper classes.

Meanwhile, the role of the domestic nanny had advanced and in comfortably-placed middle-class homes and more prestigious residences young children were likely to be cared for by a professional nanny, often aided by nursery staff in larger households. These were generally live-in domestic servants, but were nonetheless held in high esteem both by their employers and other staff, for theirs was a position of the greatest trust and responsibility. Nurses and nannies often formed very strong, even life-long attachments to the children in their care. Some worked for the same family for 20 or 30 or more years, occasionally staying on even after the children had left home.