A Little Piece of Hollywood 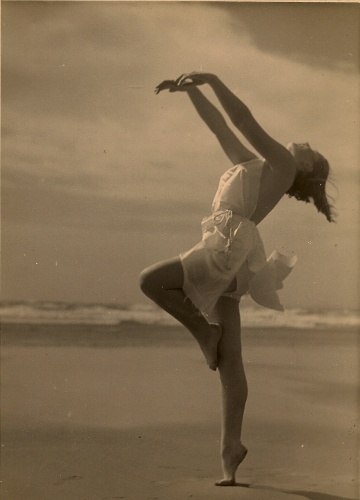 The future of Saltdean Lido is in the balance once again and a campaign has been set up to try and save this major Brighton landmark. The Save Saltdean Lido Campaign is asking the owners, Brighton and Hove Council, to start proceedings against the current lease-holder who, they claim, has failed to adequately maintain the building, action (or lack of it) which should, in their view, result in the forfeiture of the lease-hold. According to Rebecca Crook, Campaign Chair: ‘This extraordinary Grade II* Listed building is decaying day-by-day.”

That such a building should be in this position is, as The Save Saltdean Lido Campaign has pointed out, of real concern. Saltdean Lido is architecturally probably the finest lido in England and one of a diminishing number of significant examples of pre-war Modernism left in Brighton and Hove. We still have the beautiful and elegant Embassy Court, but the Bauhaus influenced Black Rock swimming pool is gone, demolished in 1978; and it seems that the Art Deco style Astoria Cinema is now going the same way.

Saltdean Lido was built in 1937-38 to designs by the architect Richard Jones and hailed as the most innovative design of its type in Britain. It was, in fact, the only lido to be featured in the Design Museum in London. Inspiration appears to have come from the modern line and form of contemporary ocean liners and aircraft and the De La Warr Pavilion in Bexhill-on-Sea. (The interior of the Swimming Stadium, West Street, Brighton – S.S.Brighton – built in 1934 and demolished in 1965 was also similar in design).

Swimming in the 1930s was hugely popular and very fashionable. Magazines of the time were full of references to health, beauty and general fitness through swimming. Vogue and Life Magazine featured the new swimming costume; launched in 1929 and heralded by designers, Jantzen, as, “the suit that changed bathing into swimming.” It was made possible by the introduction of synthetic material which allowed swimwear to be lighter, more figure hugging and importantly less absorbent. It was this suit, I venture, that stimulated greater interest in mixed, communal bathing!

Like the new ladies’ swimwear, Saltdean Lido was about style and sensuality. Iris Murdoch obviously understood this when she said: “Lidos are to swimming pools as lingerie is to underwear”. It attracted those wishing to swim, but it also drew in the fashionably chic, Brighton’s beautiful people who went to the lido to bathe and to be seen to bathe.* They were part of the growing cult of “sun worshippers”. For centuries the possession of a suntan had been associated with manual labour. One’s skin tone denoted one’s place in society, the paler the skin the better, but Coco Chanel changed all that by turning the tan into an accessory no woman could possibly be without.

Still, you do have to ask, why did people pay to use sea-water lidos when the beach, with all its swimming and posing potential, was only yards away. The answer lies with the prevailing attitude of some councils who still insisted that bathers paid to use council bathing huts or cubicles and some even charged bathers for the privilege of putting up their own tents on the beach to change in. The wonderfully named practice of “Macintosh bathing” was also frowned upon and could result in a fine. This involved changing into your swim-suit in the hotel or car park and walking to the beach wearing your Mac. And, these very same council officials could close a beach to swimmers if, on any day, they decided the weather was too “rough”.

No wonder Saltdean Lido appeared such an emblem of modernity and faith in a more enlightened future. Not only was there a 14ft by 66ft pool for 500 bathers, it opened daily during the summer season for an admission of only 6d, had a tea terrace, sun decks, café, fully equipped changing rooms and for those interested in displays of physical prowess a three-tier diving board.

Sadly its time in the sun was short, after just two summer seasons the outbreak of war caused Saltdean Lido to close and the auxiliary fire service moved in, using the pool as a water tank. The male dressing rooms were converted into a temporary church and the female section into a Sunday School. The fire service left in 1945, but the lido remained closed for another 19 years. In 1962 Brighton Council bought it for £20,000 and drew up extensive refurbishment plans including a library and community centre. In 1995 the lido closed after falling attendances and the need for more repairs. It opened in 1998 after a £2 million restoration. Now things are looking bleak once more.

If you are interested in the fate of Saltdean Lido go to www.saltdeanlidocampaign.org

The Brighton & Hove Council e-petition is open until 6th October. Organisers confirm that they have over 2,000 signatures, but would still like as many people as possible to sign. Saltdean Lido will be the subject of a full Council debate on the 20th October 2011.

*Cary Grant and Bette Davis are known to have visited the Tudor House Hotel in Rottingdean in the 1930s, who is to say that they did not dip a toe in Saltdean Lido 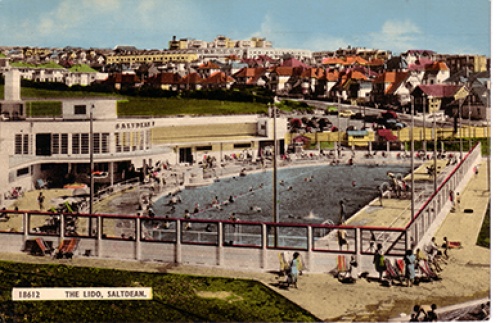 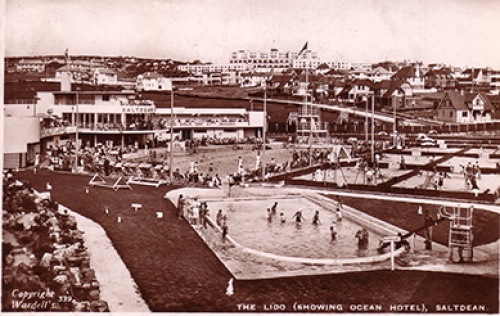