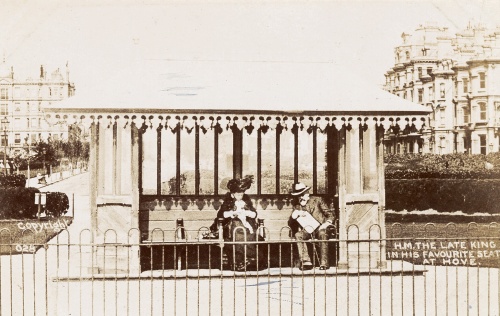 This year marks the 110th anniversary of King Edward VII’s accession to the throne. Unlike his mother, Queen Victoria, Edward was fond of Brighton and Hove. He first came to Brighton as a baby in 1842; while his parents did not return to the town after 1845, Edward remained a regular visitor for the rest of his life. After the sale of the Pavilion in 1850 Brighton lacked a royal residence, but Edward frequently stayed with local friends, such as the Sassoon family. Once he became King in 1901, Brighton once again found itself a favoured resort of the monarch. In his last years, however, more of the King’s time was spent in neighbouring Hove.

Because of this, Edward is widely remembered in Hove. Kingsway, the coastal road, was named after him in 1910, and the statue opposite Embassy Court, more commonly known as the Peace Statue, was unveiled as a memorial to him in 1912. Yet the spot with which he was most personally associated is a public bench at the bottom of Grand Avenue.

The bench was situated near the home of Arthur and Louise Sassoon in King’s Gardens, and became one of Edward’s favourite spots. After his death in 1910 it became a poignant, if unmarked, memorial. This was reflected in numerous postcards such as this one, which shows Edward and his wife, Queen Alexandra, relaxing on the bench. It’s a crude photograph, and has clearly been taken from a distance in order not to disturb the couple. But it is a simple and unaffected portrait and one that was entirely fitting for the King. In contrast to his mother, Edward had cultivated a persona of easy familiarity and affability. As such, this unpretentious and everyday view is an appropriate memorial for one of Britain’s most popular monarchs. Kevin Bacon, The Royal Pavilion and Museums, Brighton & Hove

Additional Note. The King and Queen’s long association with Brighton & Hove is also commemorated by our beloved Alex. The then Prince and Princess of Wales and their daughters (Louise, Victoria and Maud) attended the opening ceremony on 21 July 1881; Dr Taaffe named the hospital the Royal Alexandra Hospital for Sick Children in honour of the Princess of Wales (Alexandra of Denmark).