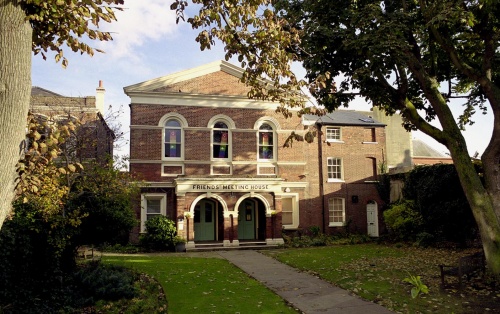 Back to school, college or university? Or, perhaps this September you are thinking of attending a course at the Friends Centre? Until August 2005, this was located in the Friends Meeting House, Ship Street, where adult education classes have been held continuously since 1876; thanks in no small part to the Quakers – the Religious Society of Friends.

I would not presume to make any statements about what Quakers believe, but I know that they have always had great faith in the idea that education enables the under-privileged to help themselves. Even in the early 18th century, in the continuing face of local hostility and intolerance, they were teaching and opening schools for boys and girls in Brighton.

The first community of Quakers in Brighton came together in the 17th century, during the reign of Charles II; when the religious independence of the Quakers was regarded as a threat and they, along with other so called ‘Dissenters’, were subject to persecution and attack. In 1658, at their first meeting in Brighton, people from the town gathered outside and were so virulent in their protest that one of the Friends lost any eye when stones were thrown at her - sadly not an isolated incident, as previously Brighton Quaker, Richard Pratt, had been killed in a similar fashion. This action did not discourage the Quakers, however, they were forced, for a while, to conduct their meetings in various secret locations in West Blatchington and Rottingdean.

When William and Mary came to the throne, the Toleration Act of 1689 gave the Quakers a degree of freedom to meet in public and, as a result, they bought an old malthouse on the north side of North Street (west of today’s Chapel Royal) to use as ‘a decent meeting house for the exercise of divine worship’. It came with a narrow plot of land, extending as far back as Church Street and this became known as Quakers’ Croft. It was home to the Brighton Society of Friends until 1806 when the Prince Regent made them an offer, I imagine, they were unable to refuse. The Prince wanted to extend his garden and close the road that ran almost under the west windows of the Royal Pavilion and to do this he needed to buy the Quakers’ Croft.

To replace their old meeting house, the Quakers bought land in Ship Street, owned by a Quaker butcher called John Glayzier. Entrance to the newly built Friends’ Meeting House was by a side door with a path leading round to Meeting House Lane. Today’s front entrance was then a plain wall with two small windows, placed high up to stop believers being distracted from their prayers. And what we now refer to as the ‘front garden’ was then a Quaker burial ground where 54 adults and 34 children were buried - and remain today - in unmarked graves.

In 1875 an adult school was added to the north of the building. This took the form of an L-shaped wing and contained a large lecture room with classrooms over. Here adults, many of them coming from railways families, (Brighton was the base for the London, Brighton and South Coast Railway) were taught writing, bible studies, temperance, literature and socialism and given access to a library and book club.

The Quaker’s practical interest in the poor and disadvantaged led them to set up a savings bank and a ‘sick coal club’, run mothers’ meetings and provide free breakfasts. Many were prominent businessmen, who used whatever means they had to support philanthropic initiatives, including the town’s public charities and local institutions. Brighton Quakers were amongst the earliest abolitionists who campaigned for the end of slavery.

Despite their strong views on pacifism, local Quakers supported the soldiers who flooded into the town during both World Wars; treating them as ‘fellow human beings’ and providing a safe haven (that was not the pub!) away from ‘war’ where, amongst other things, they could find help and materials for writing home. Indeed, the incredibly successful Friends Centre grew out of recreational activities put on for Canadian troops stationed in Brighton during WWII.

Post-war, interest in the adult school began to wane and a group of Friends came up with the idea of forming an adult education centre, which one – Frank Sainty – called a ‘People’s University’. It opened to the public in September 1945, headed by Margery and Geoffrey Sedgwick. Margery wrote: ‘it was to be open to everyone – people of all ages, nationalities, religions, occupations – and in it we would learn from each other’.

Over time the Friends Centre moved into the fields of adult literacy, numeracy and English tuition for foreign nationals. It continued to grow, all the time being supported by the Quakers, until it reached a point where there was no alternative but to find alternative, larger premises.

The Quakers continue to use the Meeting House for their regular worship meetings, but this historic building is also the venue chosen by local community groups for their many and diverse activities. And, of course, there are the afternoon lectures, ‘Tuesday at Friends’, founded by Pat Norman, former Principal at the Friends Centre, and still organised and run by her today. Education, as a way to help people find a better life, has always been central to activities taking place at the Friends’ Meeting House, but, as someone once remarked, it has also been “a venue for many marginal, alternative and non-violent social and radical groups and causes; a ‘den of nonconformity’ at the heart of Brighton”. 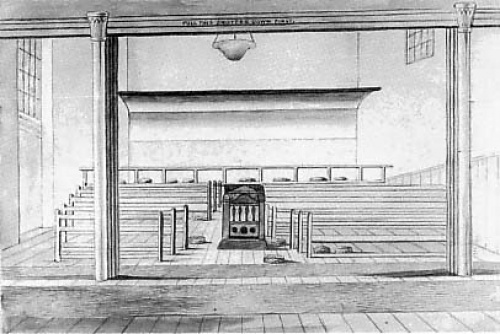 Interior of the Friends’ Meeting House. Heated by a centrally placed coke stove. The only internal decoration was a wide coved sounding-board over the speakers’ end of the room and a gallery at the west end. About 400 people could be seated. Drawing by W.A. Delamotte, 1853 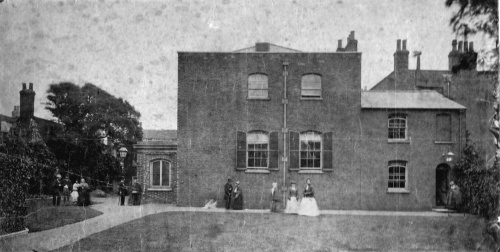 Quaker Meeting House, 1875. Burials in the Meeting House’s grave-yard stopped after the Burial of the Dead beyond the Metropolis Act, 1853, was passed. 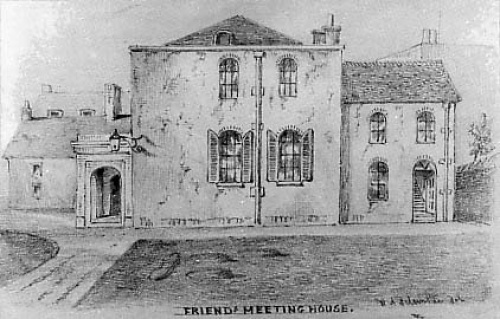 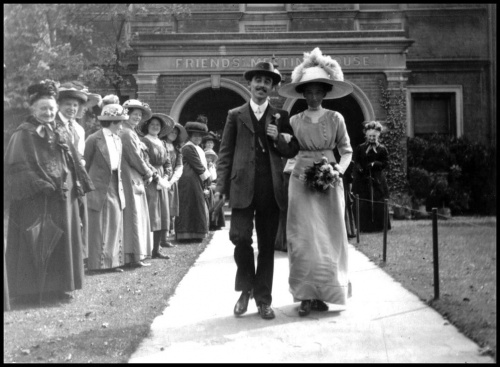