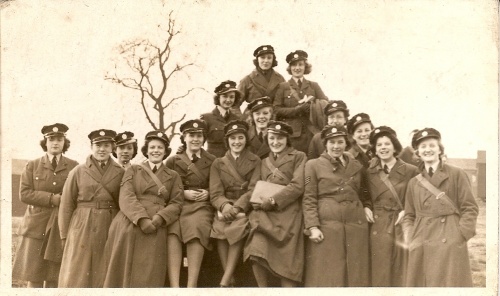 In our November issue, coinciding with Remembrance Day, we often commemorate the servicemen and women, and others who have been involved in military conflicts. This year is extra-special, as September marked the 80th anniversary of the outbreak of the Second World War in 1939. This has inspired much media coverage, while families and communities are also looking back to that turbulent time, still within living memory for some. Here we examine the kinds of photographic mementoes of WW2 that many of us have at home –studio portraits, formal group scenes and more casual snapshots that collectively record our families’ experiences of the Second World War.

The commercial photographic studios still operating in Britain and abroad were kept busy throughout the course of the war, and during its aftermath. Professional photography was generally of high quality and well-lit studio photographs usually provide clear facial and dress details, often evoking a sense of 1940s glamour. Many depict men or women who were new recruits into the armed forces, or another of the many wartime organisations. Typically, they had successfully completed their initial training and commissioned a professional photograph proudly displaying the new uniform that signified their role.

Sometimes formal photographs reveal how ancestors who had already served in WW1 were going to war for a second time, this time as experienced veterans. As the Second World War continued, extending over a longer period than WW1, many in the forces received advanced training and promotion and so newly-promoted or qualified servicemen and women might visit a local photographer to mark these occasions. The resulting photographs demonstrate their achievements by displaying the additional uniform chevrons, bars or stripes and other qualification badges that signified their advancement.

When service personnel were deployed overseas, maintaining contact with family at home was especially important. A soldier might visit a local studio on arrival in, say, North Africa or Italy and post the image back to Britain, to indicate his safe arrival and his whereabouts. Exchanging letters and photographs was particularly popular at Christmas when relatives would be acutely aware of the absence of loved ones. A photographic portrait of the subject might be inserted into a folding card or set into a specially designed regimental postcard bearing a pre-printed seasonal message.

Many large group photographs survive of military personnel and members of other wartime organisations, taken by specially-commissioned professional photographers, in Britain or overseas. Depicting our family members posing in formation alongside their colleagues, these powerfully convey the spirit of camaraderie that many remembered afterwards as one of the more positive aspects of war. Diverse and fascinating, such scenes include army sections or units, ships’ personnel, the auxiliary services and other establishments, their members wearing uniform relevant to their rank, role and the season. Formal or semi-formal group photographs also depict, for instance, the sports teams, recreational clubs and societies in which our wartime relatives participated.

Amateur photography was well-established by 1939: many people owned personal cameras and numerous servicemen took a portable camera away to war. Officially the troops were forbidden to photograph certain subjects, including German POWs, military vehicles and equipment, but casual scenes shot around the camp and when off duty were common and provide a fascinating glimpse of everyday military life. Some servicemen were posted to several different theatres of war, perhaps travelling overseas for the first time in their lives, and photographed interesting tourist sights and scenes while abroad. Many also enjoyed sampling the local social life, visiting bars and clubs – images showing the lighter side of life during the war.

Throughout the duration of the war, many casual snapshots were also taken in Britain. A common theme was the ‘departure’ photograph showing the young recruit in pristine uniform bidding family members goodbye. Friends in military units based in Britain, or when at home on leave might also take impromptu photographs of one another as personal mementoes of their war. Women assumed many additional and important duties during the war and, besides being portrayed in formal studio portraits or group scenes, appear in many civilian snapshots. These demonstrate the evolution of female dress during the 1940s, including adoption of Utility clothing and of trousers as every day and work wear. Jodhpurs, dungarees or slacks were not widely considered suitable before the war, but gradually gained greater acceptance and would have a major influence on post-war fashion.

Weddings occurred throughout the Second World War and many of our picture collections include poignant wartime wedding photographs. Initially conventional ‘white’ weddings were fairly common: despite (or perhaps because of) the war and the growing uniformity of civilian dress, many brides were determined that their wedding day would be special, a memorable occasion to treasure in hard times. Often white bridal gowns from the late 1930s were borrowed, or, following clothes rationing from 1941, families might pool their coupons to buy a new dress or the material to make one, some bridal wear expertly fashioned from (illegally-acquired) parachute silk. Due to austerity restrictions governing new garments from 1942 much wartime bridal wear was typically narrow in style and did not have a long train.

As more men joined the services, uniform became the accepted wedding attire for bridegrooms. Increasingly young single women also entered the forces, often meeting and marrying fellow servicemen, so that both bride and groom might wear military uniform on their wedding day. Due to limited time and/or material shortages during the war, brides and their families often couldn’t arrange a formal white wedding - nor were costly, frivolous occasions deemed appropriate with the growing mood of austerity. Consequently, wartime wedding photographs often portray civilian brides wearing a smart Utility-style knee-length suit or dress with a floral corsage, feminine waved hairstyle and stylish hat.