THE DEVELOPMENT OF PRESTON 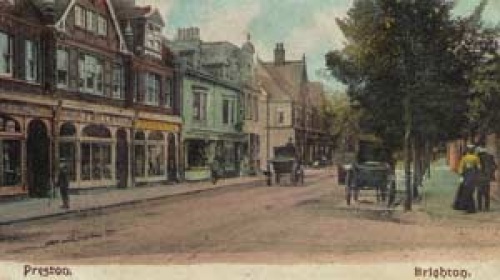 The development of Preston from a rural centre to a middle-class suburb can be traced back to Brighton’s renaissance as a fashionable seaside resort, which ultimately lead to the town growing to such an extent that, by the middle of the 19th century, it was pressing against the parish boundaries. Faced with a shortage of building land, speculators sought sites for building houses some distance from the town. They naturally looked along the main roads leading northwards, but realised that only those who could afford the travel costs could afford such locations. Their commuter costs were substantially increased by the Victorian equivalent of today’s London congestion charges, where residents had to pay a road toll to travel along the road to Brighton and their place of work. However, in May 1854 a group of influential people from Brighton and Preston greatly improved the prospects for those who wished to sell or to buy land for development in Preston by successfully getting the tollgate removed to a hundred yards north of Withdean.

In 1866, the development of the Clermont Estate began, built on land that was sold by William Harrington, stretching from the northern end of Preston village to the parish boundary with Patcham. Originally the estate was planned for 200 houses, specifically designed for people who could afford to take cabs or their own carriages to work, or from 1869 to take the train. These large, mainly terraced or semi-detached houses, most of which were rented, offered clean air and spacious gardens to upper middle class people. Five years later, just as the building of the estate was coming to a close, land owned by the Stanford family was made available for building and together the two estates significantly altered the character of Preston.

Ellen Stanford, on reaching the age of 21 (1871), was able to sell land on the Stanford Estate, but rather than relinquishing control, the Stanford Estate was very careful about the character of the building projects they permitted. They not only controlled the release of the land, but the design of each villa, the minimum building costs and the construction timescales. Most of the building work in Preston of detached and semi-detached villas was carried out by speculative builders between 1876 and 1900, with some infilling from 1921-1925. The most expensive houses were the detached villas, most of which were in close proximity to London Road or along Stanford Avenue, the main road through the centre of the estate, connecting London Road and Ditching Road. The cost of the land and the minimum building costs that the Stanfords laid down very much depended on the location and size of the plot. A terraced houses in, say, Chester Terrace had to cost at least £350 to build; in 1880 a villa in Preston Park Avenue had to cost at least £600; and in 1883, a group of houses along the west side of Preston Park had to cost at least £1,500 each to construct. The Stanford Estate had a clear vision of what they wanted and that was to construct lower middle and middle class residential housing, open spaces and generous road layouts.

Forward thinking was also involved in the decision to open Preston Park Railway Stations in 1869, as this was undoubtedly linked with plans for more prestigious, ‘up-market’ residential building along the London Road. The location of the station boosted suburban development in Preston, making the area more attractive as access to Brighton and London became easier.

The Victorian middle classes were also attracted to the area by Brighton's first and largest municipal planned park. Surprisingly, the Stanfords did not develop Preston Park themselves; instead in 1883 William Stanford sold 65 acres of meadowland to Brighton Council for the sum of £50,000. After extensive landscaping and the installation of new leisure facilities, costing £22,868, the park was formally opened on 8 November 1884 by the mayor, Alfred Cox.

Towards the end of the 19th century further development took place on land between Preston village and the Clermont Estate with the building of roads such as Cumberland and Lauriston. Lauriston Road is particularly interesting because houses on the north side were unusually designed as a group, or set piece, by the architect Charles Stanley Peach, a friend of the Stanfords and the man responsible for the design of the extension to Preston Manor. Also of interest is the fact that the road was named after Lauriston Castle, Montrose, the seat of the Macdonald family, who were linked to the Stanfords following Eleanor Stanford’s marriage to Captain G C Macdonald after the death of Thomas Stanford in 1853.

A study of the transformation of Preston from a rural area into a popular middle class suburban one is fascinating and because the work was done in such an orderly fashion and such wonderful records were kept, we can trace development chronologically almost by the road, church, pub, brewery, tea garden and park. Not forgetting, of course, the characters who actually built the houses, like the Holloway Brother who built many of the large villas in Preston Road and Daniel Friend who promoted the Clermont Estate. What a great legacy they left us. 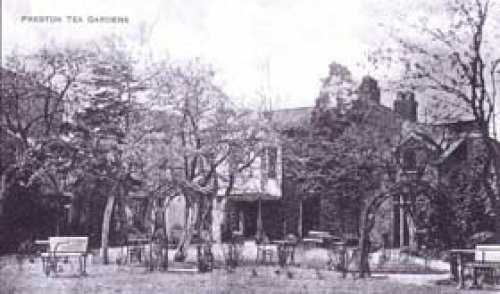