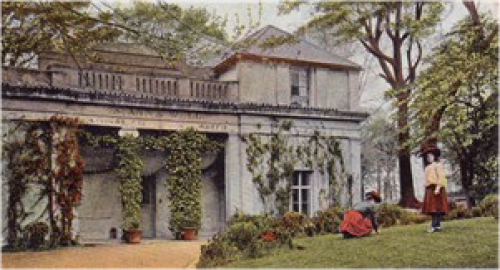 The beauty of St Ann’s Well with its wonderful scented garden, winding pathways and fishpond, plus all the amenities it provides for the community, needs no introduction to local residents. However, it might surprise some to know of the part this woodland oasis played in the successful establishment of Brighton as a health resort.

It was, in fact, all down to the ‘Chalybeate’ (iron-bearing) spring located in the southern part of the park and coincidentally the starting point of a ley line that continues over the Downs and beyond. Early in the 17th century before the development of Brighton as a resort, the water from St Ann’s Well was recognised for its special qualities. Local people knew of its therapeutic effects on ailments such as stomach cramps and shepherds were aware of the virtues of the chalybeate because of the fecundity of the sheep that drank from it. Indeed, Dudley North, who discovered a spring at Tunbridge Wells in 1606, claimed that chalybeate waters contained ‘vitriol’ and could cure:

the colic, the melancholy, and the vapours; it made the lean fat, the fat lean; it killed flat worms in the belly, loosened the clammy humours of the body, and dried the over-moist brain.

The spring as it was then was, however, rather uninviting and not the place one would expect to find members of polite society, but when Dr Richard Russell erected a small basin and sent his patients to drink the chalybeate waters in 1750 things began to change.

Dr Russell was, of course, the physician who put Brighton on the map as a fashionable health resort when he advocated the sea water cure and advised his patients to not only swim in the sea but to drink it. When he started to prescribed the spa water from St Ann’s Well he once again brought the town to people’s attention; wealthy Londoners flocked here to take the waters, making Brighton the place to be on the south coast.

After Russell’s death in 1759, Dr Anthony Relhan stepped in with his own theories about the health-giving properties of air and water. He established a medical practice in Brighton and in his paper, A Short History of Brighthelmstone; with Remarks on its Air, an Analysis of its Waters, Particularly of an uncommon Mineral ore, long discovered, though but lately used (1761), promoted the drinking of mineral waters. Relhan claimed that drinking the chalybeate water from St Ann’s Well would increase both the appetite and spirits and this further increased public interest and encouraged visitors to the area.

The water was soft, milky looking and tasted, according to Dr Relhan, ‘something like that upon a knife after it has been used in cutting lemons’, but by the 19th century the efficacy of the water alone was not enough to satisfy the demands of its society visitors and a pump house was built. This ionic-style building enclosed the well, but also provided a warm and comfortably furnished reading room and conservatory for invalids and those looking for retreat from the growing pressures of modern-life.

Brighton could not boast the patronage of Queen Victoria as she frequented the famous spa at Tunbridge Wells, but throughout its rich and varied history, St Ann’s Well attracted many influential people; Queen Adelaide, consort of William IV, reportedly drove out every day in her carriage to drink the well water, as did Princes Augusta, daughter of George III. In 1830, Mrs Fiztherbert professed herself a satisfied customer. In a letter to her adopted daughter, Mrs Dawson-Damer, she wrote, ‘I was certainly very unwell the first two or three days when I came here but I am wonderfully improved both in health and strength. I drink the chalybeate waters every day.’

In March 1882, the Brighton Gazette described the chalybeate spring as one of the finest in Europe, but unfortunately by the end of the century the spring was reduced to a trickle and the pump house closed. By this point the financier Sir Isaac Lyon Goldsmid had acquired the land from the Wick Estate and had laid it out as a private pleasure garden. His descendant, Mr d’Avigdor Goldsmids, sold the park to Hove Council in February 1907 for the sum of £10,000, they opened it to the public on Empire Day (24 May) 1908. The pump house was demolished in 1935, but the spring still issues it waters, which run as a stream into an ornamental pond.

St Ann’s Well Gardens is now a leafy park that plays a central role in our community life, but it owes much of its origins to Richard Russell, a physician from Lewes who not only pioneered the use of sea water as a cure-all, but also the health-giving properties of Brighton’s very own chalybeate spring.