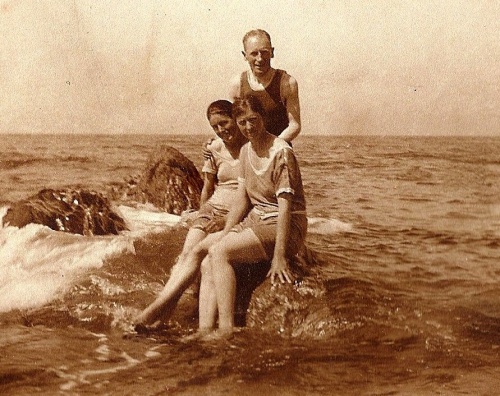 July is here and the summer holidays are imminent. As we head to Brighton & Hove seafront or journey along the coast for a day on the beach, let’s look back at the history of sea bathing and past fashions in swimwear.

Following Scarborough and Whitby, the earliest sea bathing resorts, by the mid-18th century Brighton, Margate, Weymouth and other well-appointed fishing villages and coastal hamlets were attracting a fashionable clientèle seeking amusement, as well as the invigorating sea water. As we know, under the patronage of the Prince of Wales (later Prince Regent and King George IV) a decadent social scene emerged in Brighton between the 1780s and 1820s. Late-Georgian seaside watering places, reached by stage coach or post/mail coach, offered summer visitors seafront hotels and boarding houses, shops, public houses and theatres, as well as bathing amenities. From the mid-1800s, visiting the seaside extended to a mass population as the growing railway network offered affordable travel to hundreds of coastal destinations, while improved working hours and increased leisure time enabled ordinary working people to take day trips to the seaside for entertainment and souvenirs. Later, in the early-mid 20th century, before the advent of foreign package deals, many British families enjoyed an annual summer seaside holiday.

Sea bathing being a new pursuit in the 1700s, the costumes first worn in the sea at Georgian resorts like Scarborough and Brighton closely followed the clothes used for the thermal baths at Bath – garments that basically derived from undergarments. Initially some men and boys bathed naked, following time-honoured tradition, but most wore knee-length linen drawers and, as the demands of modesty increased, added a jacket-like upper garment or ‘waistcoat’. Women typically donned a long, loose-fitting shift made with a high neck and full sleeves, the hems sometimes weighted to avoid the embarrassment of floating dresses. Bathing clothes were fashioned from stout linen or, more usually, woollen flannel, recommended for warmth and protection in the chilly sea. Heads were usually covered with linen caps and on top women sometimes added straw hats and bonnets.

During the Victorian era, men were prohibited from going naked on most public beaches and initially wore trunks whose tendency to slip down in the sea effectively had the same effect. Meanwhile female bathing attire became more attractive – at least to contemporary eyes. 1860s fashion plates illustrate heavy flannel or serge ‘paletot’ bathing dresses with fitted bodices and full skirts, echoing fashionable crinoline gowns: knee-length, these dresses were worn with long bloomer-style ‘Turkish’ pants or loose trousers. Linen caps protected the head from the cold while sunhats shaded delicate white faces from the sun. Victorian swimwear changed only slowly, although gradually it became briefer, the bloomers rising to calf-length and sleeves sometimes a short shoulder cap. Meanwhile, by the late-1800s male swimsuits were usually of leotard-like design, with a chest section (to bare the chest was considered unseemly) and usually sleeves. These close-fitting woollen costumes were better-suited to energetic male swimming, whereas most ladies bobbed around in the water in a more genteel fashion.

Prevailing ideas about bodily exposure meant that during the 19th and early 20th centuries many bathers who felt ‘undressed’ in swimwear changed their clothes in and entered the water from horse-drawn bathing machines that helped to obscure them from spectators. However, mixed bathing was becoming more common by the 1890s and during the early 1900s it became acceptable to walk on the beach wearing a swimsuit. By this time, women’s cumbersome bathing ensembles were slimming down, the bloomers now ending around the knee and dresses evolving into shorter belted tunics with fashionable sailor-style collars. These outfits were often teamed with stockings and pumps, and topped with a cap or turban-style scarf. Modesty was still paramount, but a new age was dawning as, reflecting a rapid growth in athletic activities during the early 1900s, many more females were joining men in the sport of swimming. The Australian swimmer Annette Kellerman, rebelling against rigid dress codes, reputedly devised the unitard, a combination-style, tight-fitting one-piece bathing suit initially fashioned with ankle-length legs. When she wore a short-legged version in Boston in 1907, she was arrested: considered indecent, the streamlined costumes that she championed for competitive swimming nonetheless gained acceptance and marked the beginning of modern swimwear.

During the 1910s and early 1920s some women favoured traditional concealing two-piece bathing suits, although these grew briefer still, the tunic neckline lowering, sleeves reducing to shoulder straps and hemlines rising, the drawers becoming thigh-length shorts. Yet many found the bulky serge or woollen cloth layers a hindrance and, as reservations about revealing the body’s contours progressively relaxed, the once-controversial female maillot with short legs became more popular. These costumes became very close-fitting when stretchy jersey fabrics began to be used during the 1920s: they were often striped, or had coloured trims, giving a sporty effect, while rubber bathing caps (suitable for newly-bobbed hair) and rubber beach shoes also came into vogue. By the late 1920s suntans were becoming fashionable, for bronzed skin now implied leisure time, rather than outdoor manual toil. Accordingly, swimwear was designed to expose more flesh, female costumes now displaying low backs, cut-away sides, narrow straps or halter-necklines and high legs, the hips covered by a fitted modesty skirt. Although stretchy jersey material remained common, elasticated synthetic fabrics like lastex were trialled, producing sleek, athletic costumes well-suited to the 1930s interest in outdoor exercise and physical fitness. Respectable men’s costumes retained a sleeveless vest section until around mid-decade, but finally chests could be revealed and by the late 1930s and 1940s most men wore a pair of tailored-looking short-legged trunks with webbing waist belts. 1946 witnessed the official unveiling of the daring two-piece female bikini that bared the midriff (named after Bikini Atoll in the Pacific): some women found the skimpy bikini too risqué, but the glamorous corseted swimsuits of the 1940s and 1950s featuring shaped stomach panels, boning and bra cups were equally alluring. 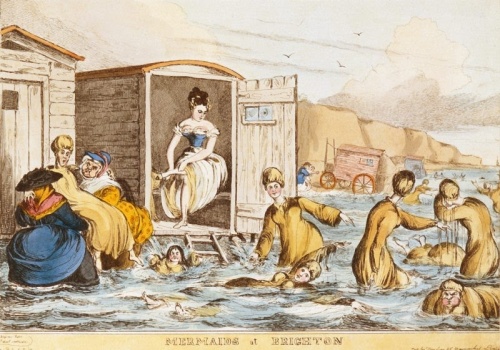 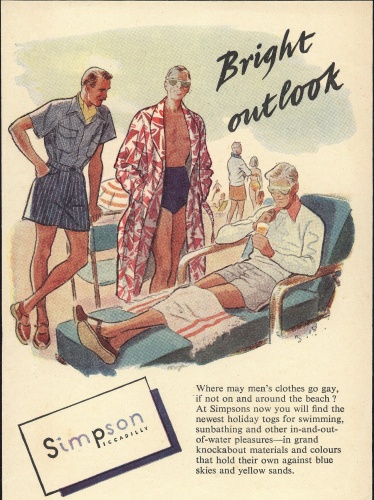